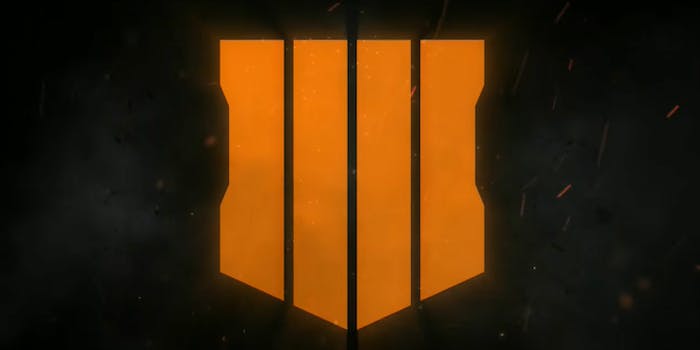 The increasingly multiplayer-centric franchise finally leaves its single-player roots behind.

Even in a world where Call of Duty reigns supreme, a single-player mode is still evidently an unwise investment for its developers. According to a report from Polygon, the latest Call of Duty game, Black Ops 4, won’t include a traditional single-player mode. This would mark the first time the long-running franchise has shipped a game without some sort of single-player component.

Anonymous sources told Polygon that as Black Ops 4’s release date grew closer, completing development on a single-player campaign was viewed as unlikely. Instead, focus continued on the game’s multiplayer and popular zombies modes. The sources implied that a cooperative mode may serve as a stand-in for a traditional single-player mode.

A separate report from Call of Duty news site Charlie Intel has also stated that Black Ops 4 will have a battle royale mode, following in the footsteps of multiplayer juggernauts Fortnite and PlayerUnknown’s Battlegrounds.

The Black Ops sub-franchise got its start back in 2010, telling a harrowing story of mind control, Cold War espionage, and the Vietnam War. Since then, the series has jumped back and forth in time from its original Cold War setting all the way to 2060, complete with robotic soldiers, futuristic weaponry bordering on fantasy, and all the military industrial complex chatter you can shake an SMG at. Call of Duty’s most recent entry revisited the series’ roots in World War II, taking players from the beaches of Normandy to the Battle of the Bulge.

Despite the continuation of flashy and bombastic single-player campaigns (and no shortage of media coverage for its more controversial depictions of violence), Call of Duty continued to become more and more associated with its multiplayer. The franchise’s esports division, Call of Duty World League, began in early 2016, featuring more than $4 million in prize money for the season.

It’s easy to understand why a single-player campaign isn’t feasible, even for a large studio like developer Treyarch. It’s a huge investment, featuring voice acting talent (Hollywood stars like Kevin Spacey, Game of Thrones’ Kit Harrington, and rapper Ice Cube have all played major roles) and no small amount of design resources for a mode that most players only spend a few hours with anyway. Activision even allows players to separately download the multiplayer these days. It’s also much harder to monetize a single-player campaign in the age of loot boxes.

It may also be difficult to see Call of Duty translating to a large-scale last-man-standing format like Fortnite, but it would make just as much sense considering the financial motive at play. If a battle royale mod does indeed come to Call of Duty, it’ll be the first major franchise to implement such a feature, rather than the comparatively smaller studios that worked on PUBG and Fortnite. It could also lay the groundwork for other massive developers to get into the battle royal genre, like Battlefield’s EA and DICE or Destiny’s Bungie, which is also published by Activision.

Black Ops 4’s tagline is “forget what you know.” It could just tie into the series’ love of weird brainwashing narratives, but it’s just as likely a message to players who have long been clamoring for a multiplayer-only Call of Duty experience. Those really seeking out a single-player Call of Duty campaign may have to resort to the Modern Warfare 2 remaster that’s in the works.

Call of Duty: Black Ops 4 releases October 12, 2018, for PS4, Xbox One, and PC. Activision declined to comment on any current reports, but it’s hosting a reveal event on May 17 to share more info about the upcoming game.