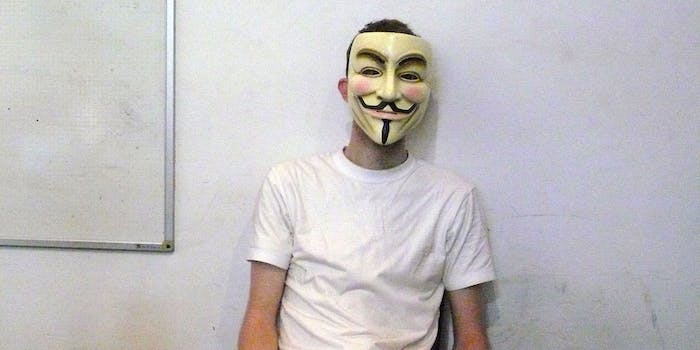 How Anonymous’s iconic masks are really made

When a reporter claimed Anonymous masks are made sweatshops, the hacktivist collective released an op-ed of its own.

Earlier this week, Anonymous pulled off its biggest protest ever, dubbed a Million Mask March, with participants in 400 cities worldwide. But the success of the mass demonstrations has been called into question by British newspaper the Telegraph, which claimed the hacktivist’s trademark marks are produced by exploiting third-world workers.

Martha Gill, a former columnist at the New Statesman, wrote a blog post for Telegraph, about the Anonymous mask. Although the article danced around the terminology, on Twitter the author wasn’t as discreet, stating that Anonymous masks were made in “sweatshops.”

So those V for Vendetta masks are made in sweatshops. Does this matter? https://t.co/4mT1DwpI2N

Anonymous, which prides itself on being the voice of the voiceless, quickly refuted the allegations. The @YourAnonNews Twitter account, which boasts over 1 million followers, tweeted a link to a Pastebin document laying out the actual circumstances of the manufacture of the Guy Fawkes masks.

“The truth is, Gill based her article on a photograph taken by Getty photographer Buda Mendes at the Condal Masks Factory in São Goncalo … where artists produced an estimated 200,000 masks yearly,” Anonymous wrote.

Declared Brazil’s “oldest and most productive mask factory” by the Associated Press, Condal was started in 1958 and produces hundreds of thousands of masks a year, mostly involving Carnival.

“Frankly, it’s sad that a photograph of dark-skinned people at work is immediately associated with forced labor,” Anonymous wrote.

There are also many Anonymous masks that are not produced by Condal. The white, thin plastic masks are available across Asia and the Middle East, other created print-out copies, and WikiLeaks truck artist Clark Stoekley sells custom sculpted masks.

That doesn’t resolve the issue of Anonymous contributing to Warner Bros., the company responsible for V for Vendetta and a known lobbyist for the controversial Stop Online Piracy Act, which Anonymous actively protested.

“This is not a fact that Anonymous has tried to obscure from the public,” Anonymous wrote. “In fact, the day before the Million Mask March, YourAnonNews tweeted that it did not recommend people purchase the mask, then stated, ‘Wear anything you want to #MillionMaskMarch, including Guy Fawkes. We just want people to be conscious about their consumer choices.’”

Reached for comment, Gill pointed out that her article did not explicitly call the mask factory a “sweatshop.” Asked about her tweet using the word, she wrote, “Don’t think you can pick out one tweet about it for particular scrutiny.”