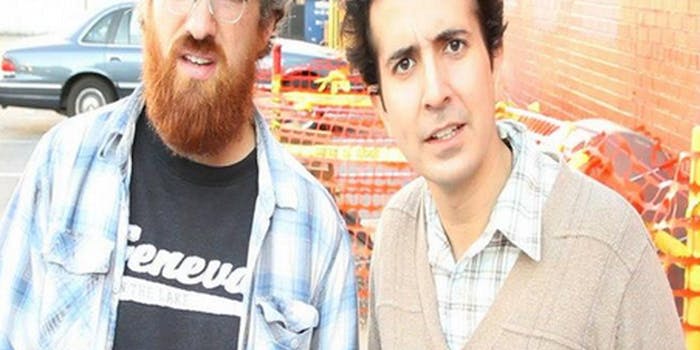 Fortress of Attitude says that YouTube deleted one of their videos due to accusations of view botting, but all of the comedy troupe's views were real.

On Dec. 19, 2012, engineers within YouTube’s offices engaged in a massive cleanup of the video sharing site.

The operation was swift, and it was altogether private, but when it concluded, site engineers had stripped an enormous collection of YouTube videos, all of which combined to have registered billions and billions of views.

Some of YouTube’s smallest channels were affected, as were the largest: Sony Music, Universal Music Group. YouTube had dropped the ban hammer on the entire online population.

“This was not a bug or a security breach,” an engineer told angry YouTube users in a Google forum. “This was an enforcement of our view count policy.”

Those who’d logged on to find their videos removed that day learned that the videos had been found in violation of YouTube Term of Use #4, Section H, which prohibits the use of any automated services that could inflate a video’s view count.

“Services that attempt to gain views through automated means or that force or trick viewers into watching videos are not ok,” the site notified users in an email. “Videos and accounts that are found to be in violation of our terms may be closed down and removed from YouTube.”

Pat Stango was caught off-guard when he got the email. As a member of New York City comedy troupe Fortress of Attitude, he’d seen his video “PS Gay Car” accumulate more than 38,000 views on the site, racking up mentions on such national media outlets as Huffington Post, Out Magazine, College Humor, and Queerty in the process.

But on Dec. 19, Stango logged onto YouTube to find that his video was in violation of TOU #4, Section H.

“Basically,” he wrote, “They said that we had used some sort of outside service to gain fake or robot views.”

There was one little problem with YouTube’s conclusion, however: Fortress of Attitude hadn’t used any outside service.

Stango took to the comedy troupe’s blog to dispel the accusations, writing that Fortress of Attitude “100 percent did not engage in any activity of that sort” and that the majority of “PS Gay Car”‘s 38,000 views came as a result of two significant November traffic spikes: on Nov. 26, when it received 2,461 views on the heels of the College Humor mention, and Nov 27, when the Huffington Post helped “PS Gay Car” rack up another 18,000.

“You can see where the spikes were when those features went up,” Stango told the Daily Dot. “It’s not like it went from 0 to 250,000 and there was no explanation for where the views came.”

There was also no explanation for why the video’s views were flagged as phony.

Stango’s requests for comment went unreturned by Google, YouTube’s governing body—the company has a terrible track record when it comes to user relations—but he was able to get in touch with New Media Rights, a non-profit legal agency that specializes in Internet advocacy with previous connections to employees within YouTube’s legal department.

New Media Rights could tell Stango who to email; they couldn’t do much to get any type of personalized response.

The agency countered YouTube’s response with a contest to every line, writing that Stango controlled the promotion of the video without any third-party sources.

NMR maintained that YouTube’s algorithm for determining suspicious actions had wrongly flagged Stango’s video and that it had ” a legal obligation to enforce its terms fairly and accurately.”

“We’re asking you to human review this error and fix it,” NMR wrote to YouTube.

NMR’s plea was a noble one. Attached to Stango’s TOS violation notice was an additional anecdote notifying him that his account would be terminated “if a terms violation were to happen again.”

Happen again? The first time was a false flag. NMR contested: “You can understand how this may be scary to a group that has spent time and money contributing to the YouTube community.”

Fortress of Attitude’s entire library video content had gone straight to YouTube for the past five years.

YouTube wrote back to New Media Rights on March 7.

“We haven’t heard from Google since March 7th,” Stango said.

Today, Stango says that he’s considering transferring Fortress of Attitude’s video catalog onto another medium, a site like Vimeo, which isn’t as big and may have more time for user relations.

“We think of YouTube as our main hosting site,” he said. “But now that they can delete the account on a moment’s notice and there’s no way I can combat that, it’s scary.

“It’s all silly, but on the other hand, we’re a small business that works in their facility, and they have so much power to do whatever they want without facing any recourse.”

Photo via Fortress of Attitude/Facebook