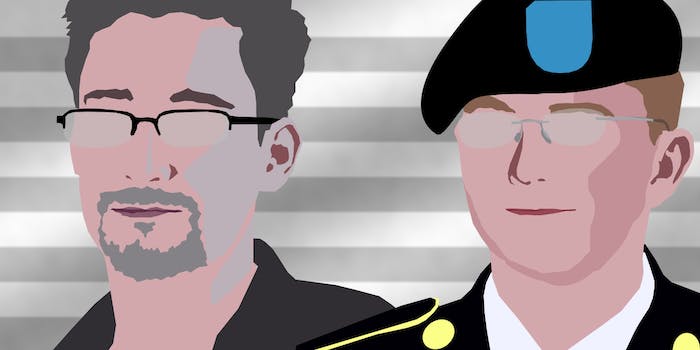 How Edward Snowden and Bradley Manning really stack up

Supporters and detractors alike have compared Snowden to Manning, but how much do the two whistleblowers and their situations really have in common?

Ever since Edward Snowden was identified as the source of the recent NSA leaks, supporters and detractors alike have compared him to Bradley Manning, the U.S. Army private who released thousands of classified documents to WikiLeaks about the wars in Iraq and Afghanistan.

But how much do the two men and their situations really have in common?

Exactly how they compare and where they differ is important. Snowden’s and Manning’s actions have real-world ramifications. The men themselves are individuals, in separate contexts, whose motivations may or may not be analogous.

The only way to do justice to them, to their actions, to the people they may have helped or hurt, and to the nation they made their choices for (or in spite of) is to examine them in detail. Only then can one attempt to make any viable conclusions.

Both men spent time in the U.S. Army. 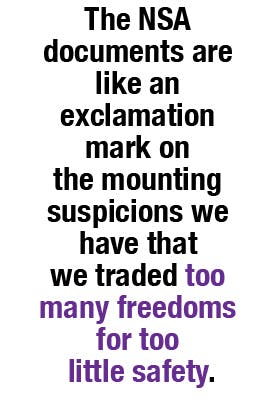 Manning, who was apparently bullied during basic training and was combative, was almost discharged, but the decision was reversed, and he finished his training to become a soldier. A private first class, Manning became an intelligence analyst. He retains his rank during his court martial, currently taking place.

Snowden spent four months in the Army reserves as a special forces recruit but did not finish training. He claims he broke his leg. The Army refuses to provide details of his departure.

After his departure, Snowden became a security guard for the National Security Agency (NSA). Eventually, he took an IT job with the Central Intelligence Agency (CIA). He left the CIA in 2009 and took employment with government contractors, including the management and technology consultancy Booz Allen Hamilton. Booz Allen sent him first to Japan and then to the NSA facility in Hawaii, where he worked as an IT analyst.

Both are white men in their 20s. Manning is 25 years old, the son of a sailor, and had a peripatetic childhood, while Snowden, 29, grew up in Maryland. Manning is gay, and Snowden lived with a girlfriend. Both are sons of divorced parents.

In 2009 and 2010, Manning stole around 750,000 documents, ranging from strategic communications concerning the wars in Iraq and Afghanistan to diplomatic cables from American personnel around the world. The documents had a range of classification levels.

Snowden, however, has so far released a few very highly classified documents, all related to the NSA’s highly secretive PRISM program. He has indicated that he has more to release but has also indicated he took time to comb through the materials and eliminate those that could compromise foreign operations and put lives at risk.

Given the inflation of classification assignments and reduction of declassifications under the Obama administration, it is difficult to ascertain the seriousness of the secret and top-secret designations. The initial fear regarding Manning’s release of the documents he had secured was that their release would compromise ongoing military campaigns and wind up costing members of the U.S. military their lives. That fear has so far proven unfounded.

One of the reasons that WikiLeaks’ Daniel Domscheit-Berg gave for leaving that organization—to whom Manning gave his documents for distribution—is his belief that its founder, Julian Assange, did not exercise care in releasing documents related to the Afghan War. He released them all on one day—without redacting details that could result in the death of soldiers and of locals, including human rights activists, who had worked with the American military.

Manning’s release of the diplomatic dispatches, on the other hand, was not dangerous per se, but it did introduce some awkwardness into diplomatic relations, damaging America’s reputation to a small degree and creating widespread mirth at some of the colorful descriptions of both allies and adversaries.

The full implications of the documents Snowden has released (and those he may still release) are impossible to ascertain at this time. But already the documents have resulted in both the House of Representatives and Senate announcing hearings on the NSA’s programs and its leader James R. Clapper Jr.’s s previous congressional testimony.

According to several intelligence agency veterans quoted in the Washington Post, Snowden, who was a “technical assistant” at Booz Allen, should not have had access to the information he disclosed. If those experts are right, his access must have come via one of two avenues.

The first possibility is that he was given the information by someone higher up in the NSA or Booz Allen hierarchy. Either Snowden volunteered or was convinced to take the fall for that figure. 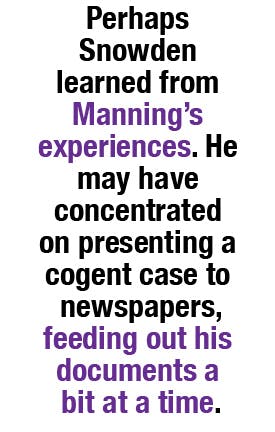 If this turns out to be the case, why would he have agreed? Perhaps he saw a chance to make a difference, or perhaps he was convinced he would be hailed as a hero by the person who wanted the information out there but was unwilling to take the responsibility for it. Perhaps that person is in a position to continue to pass Snowden information, an option that, if it were discovered, would end as abruptly as Snowden’s career.

The second possibility is that, as a technical assistant, he was in a position to either access a backdoor to the the NSA’s computer system or plant malware there.

Backdoors in computer systems are designed to give those who know their location the ability to circumvent authorization protocols. Malware is the same kind of software program that hackers use to steal consumer information (and for the lulz).

If neither of these is true and Snowden really did, as a low-level employee, have access to high-level information, Booz Allen or the NSA may have an additional slate of questions to answer, beginning with “WTF?”

Manning took the documents he shared with WikiLeaks from computers he had access to at the base where he was stationed in Iraq. Among the official responses to his ability to secure those documents was one similar to the disbelief that Snowden could have gained access to the NSA documents without help. There has been no proof, however, in the years since Manning’s arrest, that he had any such help.

In other words, the U.S. Army’s computer system seems to have allowed a low-level analyst to access, copy, and remove secret documents from a base in a theater of war. This has introduced a great concern that some of the U.S.’s most important information is at best poorly secured. Should Snowden prove to have been capable of capturing information with the highest of top secret classifications on his own, it would be a damning indictment of the American intelligence community’s ability to secure its secrets.

Manning shared the documents he capture with WikiLeaks, the document-leaking website run by Julian Assange. (Assange is currently under indictment in Sweden for alleged sex crimes and has been hiding in the Ecuadorian embassy in London for the past year to avoid extradition, which he has said was a blind for an extraction to the U.S.)

In a hearing recently, however, Manning said that he initially approached the New York Times and the Washington Post with the documents first. It was only when they refused did he turn to WikiLeaks.

Snowden, on the other hand, was taken seriously by Britain’s Guardian and the Washington Post. He seems to have cultivated a relationship with Glenn Greenwald, the lead reporter on the Guardian stories. Greenwald interviewed Snowden in his hotel room in Hong Kong, breaking the story of his identity.

Perhaps Snowden learned from Manning’s experiences and concentrated on presenting a cogent case to the newspapers and feeding out his documents a bit at a time, keeping control over their release, unlike Manning who, upon giving the document cache to WikiLeaks, lost that leverage.

All we have to judge what moved Manning and Snowden are their words, which may or may not accurately reflect their real feelings at any given point, and whatever aspects of their behavior we have witnessed.

Manning has said he grew disillusioned with the Iraq War and with the concomitant loss of civilian life, and that this disillusionment led to his decision to release the documents. Manning, a physically small man, has been described as the target of bullying when he was younger, including in basic training. He had also consulted with a “gender counselor” about the possibility of sexual reassignment surgery. He seems complicated and may have been a bit battered by the challenges of his life.

Snowden told Greenwald, “I understand that I will be made to suffer for my actions” (but) “I will be satisfied if the federation of secret law, unequal pardon and irresistible executive powers that rule the world that I love are revealed even for an instant.” He added:

“I don’t see myself as a hero, because what I’m doing is self-interested: I don’t want to live in a world where there’s no privacy and therefore no room for intellectual exploration and creativity.”

Based on his words alone, Snowden is deeply distressed at the direction the U.S. has been moving into pervasive surveillance conducted with impunity. Or, he thinks of himself as a martyr and a hero. Or both. Or neither.

Manning is currently facing 21 charges. The most serious is “providing aid to the enemy,” a treason charge that can carry the death penalty, though the prosecution has agreed not to pursue that, opting instead for a life sentence. The other charges carry a combined 20 years in prison.

Snowden, of course, has yet to be found, much less charged. However, the usual suspects have already begun to call for his arrest and prosecution. The Justice Department is currently conducting an investigation and plans to charge him soon, in part to assist in any extradition request. Treaties usually require that the requesting country files charges before making the request.

In his interview with the Guardian, Snowden mentioned Iceland as a country he might seek asylum. Russia has indicated a possible willingness to grant him asylum.

The ultimate effect of these leaks on the systems they indict will only be revealed in time. For what it is worth, Daniel Ellsberg, the former Pentagon official who leaked the Pentagon Papers in 1971, told the Associated Press that Snowden’s leak, having a higher “degree of significance,” was more important than Manning’s.

Ellsberg maintained that Snowden’s position enabled him to access more important information, information that detailed a high-level program directly trained on its own people to their detriment and uncovered lies that were told to the American people via their elected representatives.

Snowden’s leak certainly does seem more important than Manning’s at first blush. War, after all, prominently features civilian casualties, and diplomats, when they speak frankly, are not necessarily diplomatic.

But the NSA documents that Snowden has released are like an exclamation mark on the mounting suspicions we have that we have traded too many freedoms for too little safety.