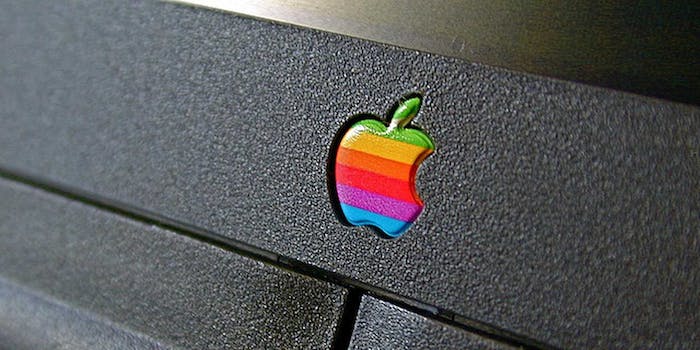 Is iOS 7 better than iOS 6? Does it look too much like Android? Oh yeah, and is iOS 7 for wussy, emasculated girlie-men? Ask Jim Lynch.

Gavia Baker-Whitelaw contributed to this report.

As with every new Apple product launch, iOS 7 inspired days of frantic analysis from technophiles. Is the upgrade actually better than iOS 6? Does it look too much like Android? Will the new version of Apple Maps be as good as Google’s?

Oh yeah, and is iOS 7 for wussy, emasculated girlie-men?

On Wednesday, two days after the technology giant introduced its iOS 7 software at the 2013 Worldwide Developers Conference (WWDC), Jim Lynch—a former writer and editor for publications like PC Magazine, Extreme Tech, and Computer Gaming World—published a post on his personal blog titled “iOS 7: An Estrogen-Addled Mess Designed for 13 Year Old Girls.” Lynch accuses Apple of feminizing the software by employing a pastel color scheme, much to the chagrin of manly, masculine iOS users like himself.

“But my eyes!!!” he proclaims, like Apostle Paul did on his way to Damascus.

“It felt like someone had dragged a cheese grater across my eyeballs when I saw the iOS 7 home screen, with its horrendous icons that looked like they were designed by a committee from the National Association of Gals (NAG) or… gasp!… Lisa Frank!”

Lisa Frank is an American artist whose company specializes in lunch boxes and Trapper Keepers emblazoned with rainbows and cute animals. The artwork is popular among teenage girls.

“The minute that you enter the iOS 7 home screen, you realize that it has been designed for a gaggle of giggling 13 year old girls,” Lynch laments alliteratively.

“The color scheme is almost unbearable if you’re a man that appreciates the stronger, richer and more detailed icons in iOS 6,” he adds. “The first time you see the iOS 7 icons, it feels like somebody kicked you in the balls with no warning and for absolutely no reason.” 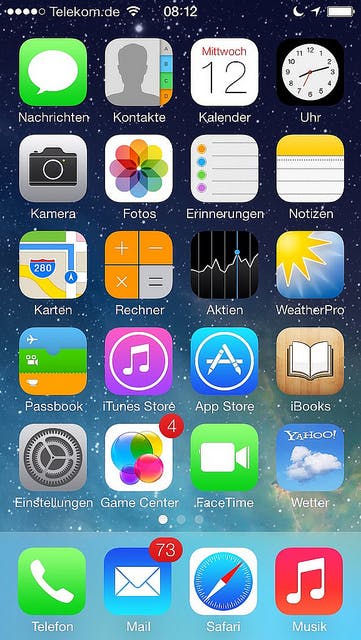 The topic of balls, by the way, is a recurring theme in Lynch’s post. The angry blogger mentions balls a whopping 11 times.

“[Gaming] is known as one of the few communities that is still mostly masculine in its perspective and sensibilities,” he declares proudly. “So what was Apple thinking by slicing off Game Center’s balls like this?”

There’s a “real gender issue” with iOS 7, he argues. “The manly, solid colors and design found in iOS 6 have been chopped off as viciously as Lord Varys’s manhood in Game of Thrones.” 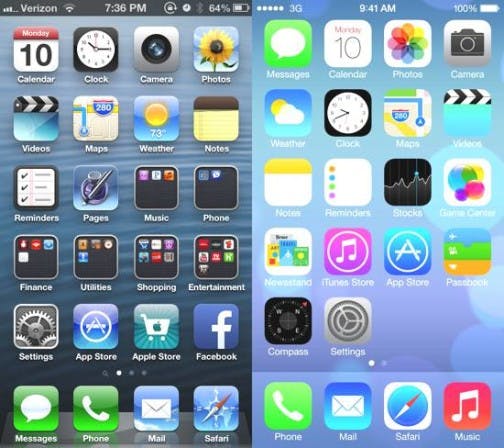 Lynch isn’t content to set his sights on women. He goes after homosexuals as well. Men who sleep with men are, as we all know, lesser men.

“Let’s not forget Tim Cook here either,” he adds.

“There’s no doubt that Cook had to go along with feminization of iOS, he’s the CEO of Apple and has final say in any changes to iOS. It’s long been rumored that he’s gay and that’s fine. But come on, Tim! There are all kinds of gay guys out there, some gay guys are very masculine in their sensibilities. After seeing iOS 7, I’m betting that Tim Cook isn’t one of them. Come, Tim! Butch it up a little bit please, and fix this mess before it’s unleashed on the male public.”

Yes, Tim Cook. How dare you use your position as the leader of one of the most powerful corporations in the world to shove the gay agenda down the throats of red-blooded Americans like Jim Lynch?

Many commenters took Lynch to task:

“Well this is one of the most disgustingly misogynistic things I’ve ever read. All over a phone interface. Jesus Christ…” opined Mr. DJB.

But instead of backtracking, Lynch doubled down on his argument, accusing anyone who disagrees with him as infringing on his First Amendment rights.

“[If] I was a woman and I’d written an article castigating Apple for being ‘sexist’ for one reason or another, I’d be celebrated for my ‘courage,'” Lynch responded to one of his accusers.

“Why is it right and okay for a woman to write something from a gender perspective, but wrong for a man to do so? Would you have said I have issues if I was a woman writing from a feminist perspective? I doubt it, you’re most likely be afraid to do so for fear of the sisterhood coming down on you with false charges of sexism, etc.”

Jim Lynch is not alone in dissing the pastels of iOS 7. According to some other Apple users, the iOS 7 is (among other things) a “1980s high school girl’s dream” and “too girlish.” It’s even inspired a Tumblr called “Jony Ive redesigns things”, where people photoshop real-world objects into the pastel-heavy style of Apple’s chief designer. 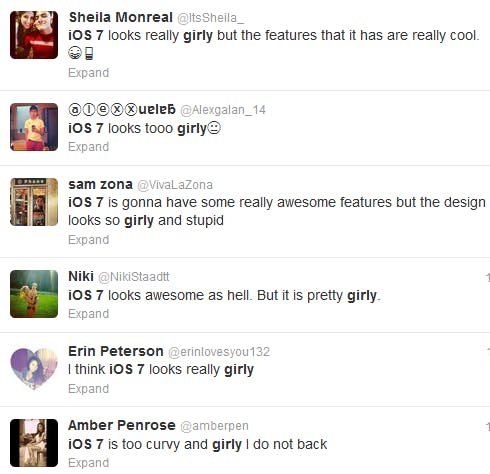