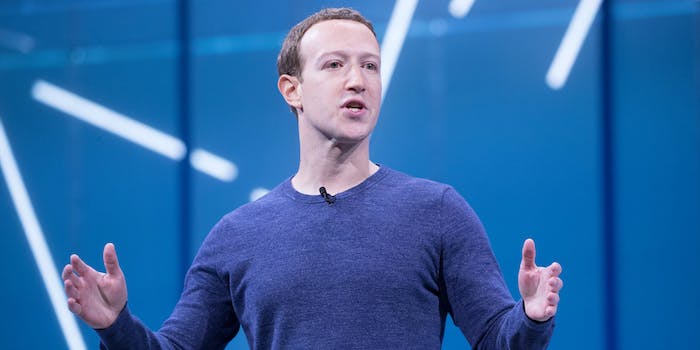 Regulation over big tech has been a hot topic recently.

Facebook CEO Mark Zuckerberg has spent the last few days talking about social media regulation, an issue that has come up more frequently among lawmakers in the past year.

Zuckerberg first touched on the issue while speaking at the Munich Security Conference in Munich, Germany on Saturday. He suggested trying to regulate the social media giant by treating it “somewhere in between” a publisher or a telecommunications company.

“In terms of the regulatory framework on content: I do think that there should be regulation on harmful content… I think that there’s a question about which framework you use for this,” Zuckerberg said. “Right now there are two frameworks that I think people have for existing industries—there’s like newspapers and existing media… and then there’s the telco-type model, which is ‘the data just flows through you’, but you’re not going to hold a telco responsible if someone says something harmful on a phone line.”

“I actually think where we should be is somewhere in between.”

The Facebook CEO continued to talk about regulation in an op-ed published in the Financial Times on Sunday.

In the op-ed, Zuckerberg said that regulation “may hurt Facebook’s business in the near term,” but said he believed “it would be better for everyone, including us, over the long term.”

“These are problems that need to be fixed and that affect our industry as a whole,” he wrote. “If we don’t create standards that people feel are legitimate, they won’t trust institutions or technology.”

In the op-ed, Zuckerberg said he supported the Honest Ads Act, a bill that updates disclosure rules for online political advertising, and the Deter Act, a bill that would impose sanctions on countries that meddle in U.S. elections, specifically Russia.

Only the first bill offers any sort of change to Facebook, though.

Last year, Zuckerberg wrote an op-ed for the Washington Post where he said he was in favor of some form of regulation.

Regulating big tech and social media has become a hot topic in Congress and the 2020 campaign trail in recent months.

Sen. Elizabeth Warren (D-Mass.), a 2020 Democratic presidential hopeful, has called for breaking up companies like Facebook, Google, and Amazon–leading to Zuckerberg reportedly calling her an “existential threat” to his company.

Meanwhile, Section 230 of the Communications Decency Act—which essentially shields websites from being liable for what is posted on them by third parties—has been criticized by lawmakers, with some being open to repealing the section.

The section has been called “one of the most valuable tools for protecting freedom of expression and innovation on the internet” by the Electronic Frontier Foundation.