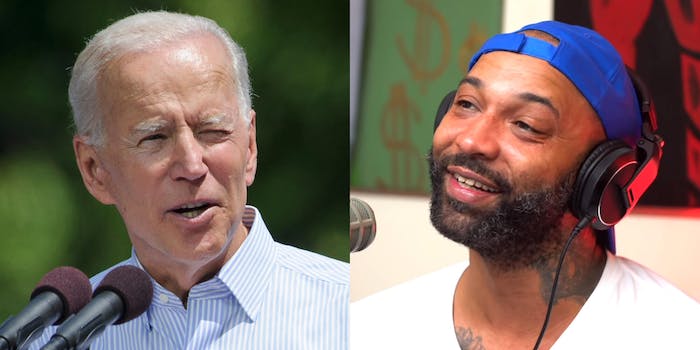 They are interesting old tweets. But they aren't Biden's.

In 2020, it only takes one bad old tweet to get you canceled. That’s why celebrities, reporters, and politicians pay people to have their social media scrubbed, to make sure an askance thought posted in 2012 doesn’t drag down your life.

But what happens when the tweets everyone keeps dredging up aren’t your own?

Joe Biden is a longtime politician. He’s leading in the 2020 Democratic primary.

No, that would be Joe Budden, the Jersey City rapper who grew from mixtape fame and made a dent on the Billboard charts with 2003’s “Pump It Up.”

While a presidential candidate needs to be industrious and determined, people want to know, would you vote for someone who would post that on main?

Would Joe Biden be delivering hard truths about sex on the TL?

It seems like a mix of deadpan humor and earnest confusion, but it’s making noise on the social network.

Although only a few Budden tweets have been retweeted, just about every tweet could be made to get a laugh if you flagged it as something Biden may have said years ago.

Biden and Budden did not respond to a request for comment.