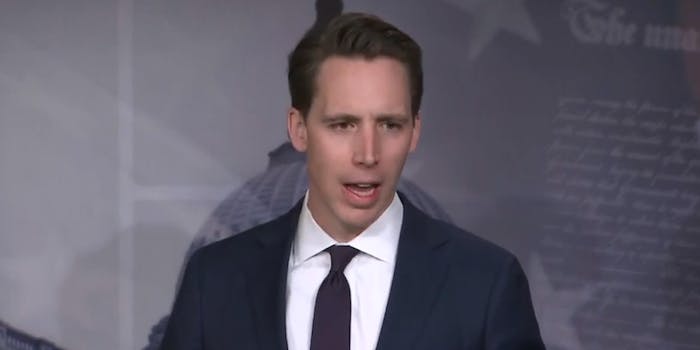 Democrats have proposed the opposite.

Sen. Josh Hawley (R-Mo.) is proposing folding the Federal Trade Commission (FTC) into the Department of Justice (DOJ), a move he says is necessary to hold big tech companies accountable.

Hawley, a hash critic of big tech, announced his proposal on Monday. As part of the restructure, the FTC would be moved within the DOJ and it would be headed by a single Senate-confirmed director.

“The FTC isn’t working. It wastes time in turf wars with the DOJ, nobody is accountable for decisions, and it lacks the ‘teeth’ to get after Big Tech’s rampant abuses,” Hawley said in a statement. “Congress needs to do something about it. I’m proposing to overhaul the FTC to make it more accountable and efficient while strengthening its enforcement authority. This is about bringing the FTC into the 21st century.”

Over the past year, the FTC has slapped Facebook with a $5 billion fine after it investigated the social media giant’s privacy practices and Google with a $170 million fine after it found that it collected information about children without their parents’ consent on YouTube.

Both settlements were met with criticism from lawmakers for not being harsh enough.

Meanwhile, other lawmakers have gone in a different direction than Hawley, and proposed creating an entire new agency in the government dedicated to investigating tech issues.

The new agency would have a director who is appointed by the president and confirmed by the Senate. It would be tasked with enforcing “users’ privacy rights and ensuring companies follow the law,” the lawmakers said at the time.

Correction: DOJ and FTC are both part of the executive branch.