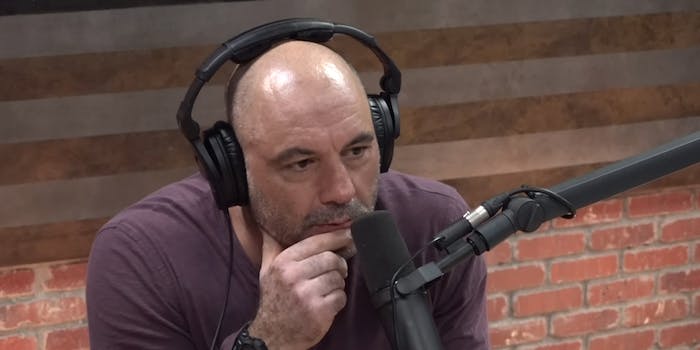 Petition calls for Joe Rogan to moderate a 2020 presidential debate

The petition had more than 1,000 signatures as of early Monday.

More than 1,000 people have signed a petition urging the Commission on Presidential Debates to have comedian and podcast host Joe Rogan host a debate during the 2020 election cycle.

The Change.org petition, “Get Joe Rogan to Moderate the 2020 Presidential Debate” was created several months ago, but picked up steam on Monday—reaching 1,000 signatures early in the day. The petition argues that Rogan has interviewed politicians on both sides of the political spectrum–including two Democrats currently running for the party’s 2020 nomination, Rep. Tulsi Gabbard (D-Hawaii) and Andrew Yang.

Earlier this month, Rogan also interviewed Sen. Bernie Sanders (I-Vt.) bringing his total to three, where they discussed what they believed were problems with the format of the first two 2020 Democratic presidential debates.

Many of the comments on the petition seemed to believe that the current debate formats are broken, and that Rogan would do a better job at hosting the forums than cable news networks.

“All the other moderators have let one or a few candidates talk all over the others and everyone gets off topic. I want to actually hear real, intelligent answers, not everyone arguing gibberish over each other. Rogan would actually be able to get something worthwhile out of a debate,” one commenter wrote.

As of Monday morning, the petition had 1,585 signatures and was continuing to gain more.

While there is clearly interest in having Rogan host a debate, others might not be as open to the idea. Some have criticized Rogan for interviewing a number of far-right personalities on his program, and for having a lack of women guests.