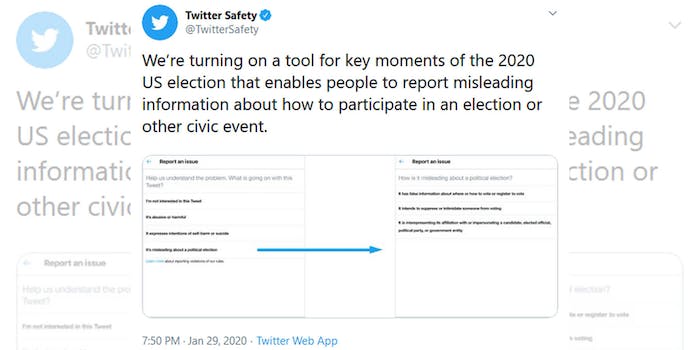 There are several options that users can pick.

“As caucuses and primaries for the presidential election get underway, we’re building on our efforts to protect the public conversation,” Twitter’s Director of Public Policy and Philanthropy Carlos Monje Jr. said in a statement. “We’ve turned on a tool for key moments of the 2020 U.S. election that enables people to report deliberately misleading information about how to participate in an election or other civic event.”

We’re turning on a tool for key moments of the 2020 US election that enables people to report misleading information about how to participate in an election or other civic event. pic.twitter.com/BxHAiLSWjG

Specifically, when a user goes to report a tweet they will be given an option that can mark it as “misleading about a political election.” From there, the user will be able to choose whether it is misleading about how or where to vote; whether it is intending to “suppress or intimidate someone from voting;” or if it is misrepresenting its affiliation with a government official, candidate, political party, or government entity.

The tool works similar to the protocols already in place for reporting tweets, according to Twitter. When a person reports a tweet, it is reviewed against the company’s rules—which already state you cannot manipulate or interfere in elections.

Twitter has recently taken a few steps to fight disinformation.

Last, year Twitter announced that it was banning all forms of political advertising, and rolled out details of its plan. The ban carves out an exemption for “cause-based advertising.”

The company’s announcement about flagging misleading election-related tweets came around the same time that 2020 Democratic presidential hopeful Sen. Elizabeth Warren (D-Mass.), who has been critical of big tech, announced a plan where she said she would “push for new laws that impose tough civil and criminal penalties for knowingly disseminating” false information online about how and where to vote in U.S. elections.