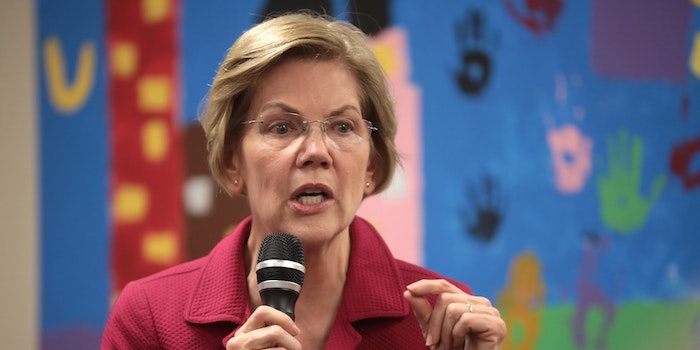 Warren also called for increased cooperation between the government and tech companies about disinformation.

Warren unveiled the plan on her website on Wednesday. In it, she takes specific aim at the spread of false information online about how and where to vote in U.S. elections.

“I will push for new laws that impose tough civil and criminal penalties for knowingly disseminating this kind of information, which has the explicit purpose of undermining the basic right to vote,” Warren wrote in her plan.

The Massachusetts senator has been critical of large tech companies like Facebook, Google, and Amazon on the campaign trail, and has advocated for breaking up the tech giants.

As part of her plan, Warren calls on the companies to work together and with the government to share information about disinformation to “better identify cross-platform disinformation campaigns and alert law enforcement officials of threats.”

She also calls for the companies to clearly label content that is created or promoted by state-controlled organizations and for opening up data to researchers, among other things.

If elected, Warren also said she would reinstate the position of cybersecurity coordinator on the National Security Council, have countries share information about how to coordinate responses to disinformation campaigns, and “establish rules around information and data sharing to ensure that platforms can share with each other and with the government while respecting individuals’ privacy.”

“The stakes of this election are too high—we need to fight the spread of false information that disempowers voters and undermines democracy,” Warren wrote in her plan. “I’ll do my part—and I’m calling on my fellow candidates and big tech companies to do their part too.”