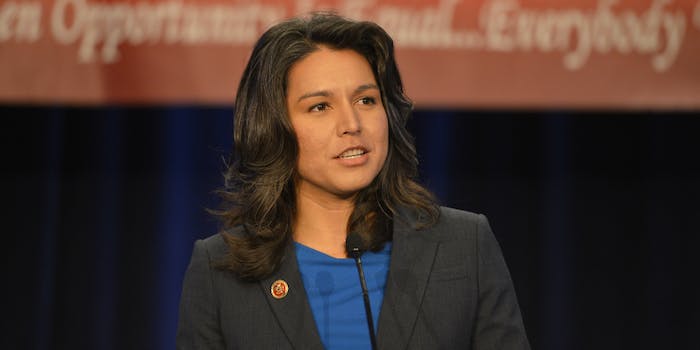 Her campaign claims the tech giant tried to 'silence her.'

Rep. Tulsi Gabbard (D-Hawaii) is suing Google for $50 million for infringing on her First Amendment rights.

The suit was filed by Gabbard’s campaign committee Tulsi Inc. in California on Thursday. In the suit, the campaign calls out Google “for serious and continuing violations of Tulsi’s right to free speech” and claims that the tech giant plays favorites with presidential candidates.

It alleges that the Democratic presidential candidate was unable to buy ads for six hours after the first Presidential debate, a peak time for American voters to search candidates.

“TULSI202: In the hours following the 1st debate, while millions of Americans searched for info about Tulsi, Google suspended her search ad account w/o explanation. It is vital to our democracy that big tech companies can’t affect the outcome of elections,” Gabbard’s official Twitter account posted on Thursday.

Google responded by implying that Gabbard’s advertiser account was flagged for “unusual activity.”

“We have automated systems that flag unusual activity on all advertiser accounts–including large spending changes–in order to prevent fraud and protect our customers, “Google explained of the suspension, according to the Verge. “In this case, our system triggered a suspension and the account was reinstated shortly thereafter.”

But Tulsi’s team isn’t buying Google’s response, claiming the company didn’t give a good explanation for the suspension or its reversal.

“First, Google claimed that the Account was suspended because it somehow violated Google’s terms of service. (It didn’t.) Later, Google changed its story. Then it changed its story again. Eventually, after several hours of bizarre and conflicting explanations while the suspension dragged on, Google suddenly reversed course completely and reinstated the Account. To this day, Google has not provided a straight answer—let alone a credible one—as to why Tulsi’s political speech was silenced right precisely when millions of people wanted to hear from her,” the lawsuit reads.

Tulsi’s organization is also utilizing the opportunity to call for the breaking up of big tech.

“Big Tech’s dominance represents a clear and present danger to our democracy,” a press release reads. “That’s why Tulsi is fighting back, and has filed a lawsuit against Google in federal court.”