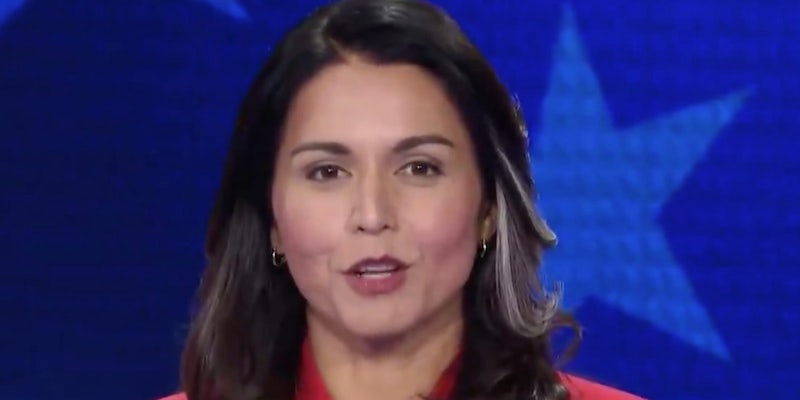 Nobody messes with Tulsi

Just because you’re stuck onstage with nine other Democratic presidential hopefuls doesn’t mean you can’t pick up some sweet engagement on social, right?

Vrindavan’s evening at the helm of Gabbard Twitter began on safe footing, with a tweet of big sis getting a big moment during the debate.

Later on, however, Vrindavan dropped the dynamite by taking a shot at the debate hosts for what she saw as their preferential treatment of Sen. Elizabeth Warren (D-Mass.)

Some were confused to see a tweet from a candidate who was literally in the middle of the debate that very minute. A few pointed out that Gabbard has a history of opposing equal rights for LGBTQ people. She addressed this again during tonight’s debate, saying most people could relate to being raised in a socially conservative household.

But most were either remarkably underwhelmed or amused.

Maybe she should have answered her question instead of performing an opening monologue.

Once bitten, Vrindavan was twice shy choosing her, or, well, her sister’s words.

In later tweets, she quoted her sister on LGBTQ equality and stuck to a safe subject for anyone running for the Democratic nomination: criticizing Donald Trump, writing on Tulsi’s behalf: “This president & his #ChickenhawkCabinet have led us to the brink of war w/ Iran. I served in the Iraq War that took over 4k of my brothers and sisters lives. War w/ Iran would be far more devastating and costly than the Iraq War.”

Even though she should.