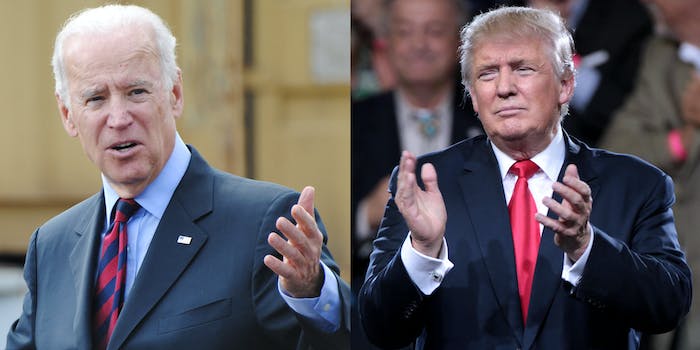 That would certainly be... unique in presidential match-ups.

Joe Biden, a 2020 Democratic hopeful, had an unorthodox idea to push back against President Donald Trump should they meet up in the presidential election: a push-up contest.

Trump has railed against Biden in a number of tweets and comments, calling him “Sleepy Joe” among other insults.

During an interview with MSNBC’s Morning Joe on Tuesday, Biden joked when asked what he’d say to Trump if his age or mental state was brought up during a hypothetical 2020 debate.

First, Biden said he was “used to bullies,” before answering another question and coming up with the push-up contest idea.

“I’d say, ‘come on Donald, come on man. How many push-ups do you want to do here, pal?’” the former vice president told Mike Brzezinski. “I mean, jokingly, you know, come on, run with me, man.”

Biden and Trump have a history of going back-and-forth with each other when it comes to physicality.

Last year, the former vice president said he would “beat the hell out of” Trump if they were in high school if he heard about the remarks he’s made about women, including the Access Hollywood tape.

In response, Trump said Biden would “go down fast and hard, crying all the way” in such a fight.

Biden is ahead in most polls in the early stages of the 2020 Democratic primary.

You can watch all of Biden’s interview with Morning Joe here.