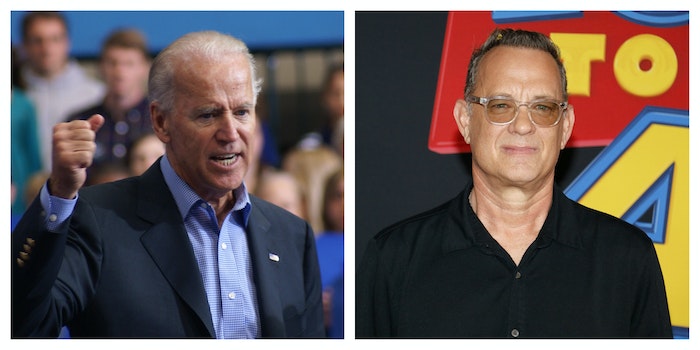 On Monday, the Federal Elections Commission published the July filings of every candidate running for federal office. Which means that with a little know-how, it was easy to search for the names of famous figures among the tens of thousands of pages of filings.

In that spirit, here’s a look at which celebrities the wide field of 2020 candidates managed to bring into their orbit.

Buttigieg had the best fundraising quarter in the entire field with a whopping $24.8 million. That put him above Joe Biden at $21.5 million and Sen. Elizabeth Warren (D-Mass.) at $19.1 million. And the youngest candidate in the race also performed with the stars.

Some of those figures, like Takei and Streisand are outspoken Democrats with Takei donating to a number of campaigns.

Streisand’s history of donations dates back to Sen. Dianne Feinstein (D-Calif.) in 1992. However, others like Aniston are relatively newer to the sphere—a donor lookup for her shows that she has only given to two presidential candidates before, Hillary Clinton and Barack Obama. Her $2,300 donation to Obama in March of 2007 was the last time that Aniston donated to a candidate in the primary.

As the Californian in the race and a legitimate front-runner, Harris is a top pick for Hollywood types looking to push some money around politics. She made hundreds of thousands of dollars at a May fundraiser that featured a number of TV big-wigs.

Overall in the race, Harris came in fifth, raising just under $12 million and the FEC filings show that she brought in plenty of cash from the stars. Names on her list included Michael Douglas, Jennifer Garner, Sean Penn, Emma Roberts, Cecily Strong, Lily Tomlin, Alysia Reiner, and Rita Wilson.

Biden had a strong fundraising quarter, coming in 2nd to Pete Buttigieg, but he didn’t exactly clean up with the stars of the silver screen. The biggest name on Biden’s list was Tom Hanks, who gave him $1,400 in May. The Forest Gump star has a politically active wallet, and he most recently gave to Rep. Adam Schiff (D-Calif.) in March.

Other names on Biden’s list include Kaitlin Olson of It’s Always Sunny in Philadelphia, Rita Wilson, and George Takei.

The Massachusetts senator has made a big deal of her grassroots campaign that is aimed at the everyman, but she still managed to get support from some big names. Those included Jade Harlow, Bette Midler, Amy Schumer, Scarlett Johansson, and Rosie O’Donnell.

Two of those names are particularly notable as Schumer is the niece of Senate Minority Leader Chuck Schumer (D-N.Y.) and O’Donnell has been a frequent target of President Donald Trump’s Twitter attacks.

Booker had a pretty dismal fundraising quarter. With only $4.5 million, he was far out of reach of the top five candidates. But he still managed to earn a $2,800 check from Ben Affleck in May.

Bernie brought in $18 million this quarter but he did it without much help from Hollywood. Among the names on his list was Ted Levine—who played Buffalo Bill in Silence of the Lambs.

The Vermont senator did much better with the music industry. He earned donations from Jackson Browne and Dustin Davidson, the bassist for hardcore band August Burns Red. Alex Ebert, who was the frontman for Edward Sharpe and the Magnetic Zeros gave $250 to Bernie in April.

Unfortunately, we were unable to find many substantial names in the FEC filings of self-help guru Marianne Williamson. Only a handful of donors listed their title as “actor” or “actress” and none of them would be familiar to even the most hardened television and movie addict. The only name on that list that popped out was YouTube personality Mama Bee, which feels right. However, outspoken Trump critic Alyssa Milano late Tuesday pledged to attend a fundraiser for her via Twitter.