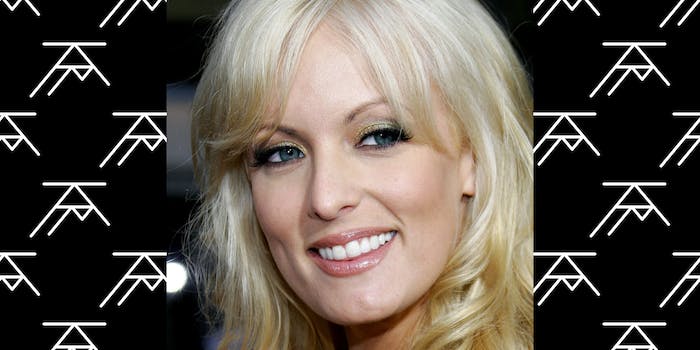 People are looping her into sex trafficking rumors.

After speaking out publicly about her experience with President Donald Trump, adult film star Stormy Daniels has weathered all sorts of vitriol from conservatives and the far-right. But the latest theory brewing may be the most absurd yet: that she is mixed up in the notorious alleged cult and sex trafficking ring NXIVM.

After Daniels did a photo shoot with Penthouse, a question posed on Twitter by the magazine became a hotbed of conspiracies.

Who knows what @StormyDaniels tattoo is of?

NXIVM began as a multi-level marketing scheme that has been accused of devolving into a cult. It made headlines the past two months when its founder, Keith Raniere, was arrested on sex trafficking charges. Former members say Rainere kept women as slaves, branding them and forcing them to have sex.

Actress Allison Mack was also arrested, and authorities believe she was tasked with recruiting new women to join.

According to a New York Times exposé on the cult, women were held down and branded on both hips.

Each woman was told to undress and lie on a massage table, while three others restrained her legs and shoulders. According to one of them, their “master,” a top Nxivm official named Lauren Salzman, instructed them to say: “Master, please brand me, it would be an honor.”

A female doctor proceeded to use a cauterizing device to sear a two-inch-square symbol below each woman’s hip, a procedure that took 20 to 30 minutes. For hours, muffled screams and the smell of burning tissue filled the room.

Now, internet sleuths think the innocuous tweet about Daniels’ tattoo has revealed that she was involved in the cult, as well. And while the initial accusation pertained to her left hip, some think they’ve found one on the right, too.

So Stormy Daniels apparently was branded by NXIVM at some point then tried to cover it with a hip tatt? Interesting. Read more here:https://t.co/XM3UDm3ZKt pic.twitter.com/lmly4VjPCU

Daniels replied online to the allegations, saying that the images were Photoshopped and the scar people pointed to was from surgery.

1. I'm a model NOT a client. 2. You are a fucking psycho. There are literally thousands of pics/video of me nude to disprove your terrible photoshopped conspiracy theory

Unfortunately, in 2018, one specious accusation online is enough to send the denizens of the internet in a frenzy. InfoWars picked it up after the fervid Trump supporters on Reddit’s r/The_Donald jumped all over it.

Users on the subreddit tried to pick apart her story, saying a surgery scar couldn’t have been in that shape, delving into whether it could be caused by an operation for ovarian cysts.

The shit storm also brewed on Reddit’s r/Conspiracy, a forum for some of the internet’s most dubious claims. Commenters pounced on Daniels’ response, where she originally brought up Photoshop then said it was a surgery scar.

But more likely, she was just saying how someone Photoshopped it to make her scar like it was a brand before also noting she’d had surgery.

Back in 2014, she said just that: the tattoo was to cover up the scar.

@DlNotso1 Guess you'd have been happier w/the terrible scar from my emergency surgery instead of the pretty&meaningful tattoo covering it?

@INFLIKT Don't know. I had to have surgery. Mine is to cover the scar.

Daniels has made reference to surgery on Twitter, though she did not specify what it was about. She did say at one point she couldn’t dance because of it.

@ernie_mangus I rarely take meds. And I HATE pain meds. Had surgery & was given generic Norco & still have lots of pain so was wondering.

That said, some think her own tweets belie the truth of the matter, as she once tweeted jokingly about joining a cult.

I think I am about to be initiated into
a gang….or maybe it's a cult. Lol

Daniels did not respond to the Daily Dot’s inquiry on Twitter.