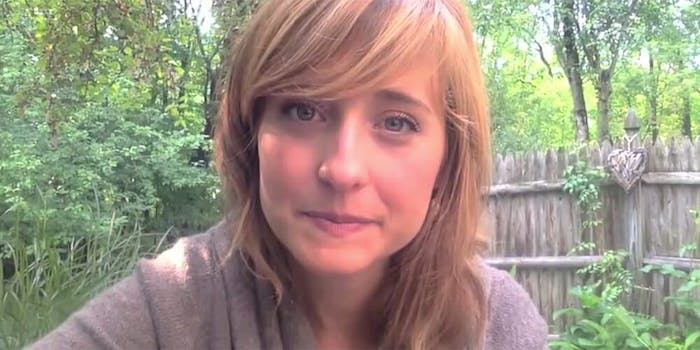 Smallville actress Allison Mack has been arrested for her participation in an alleged “sex cult case” related to a group called NXIVM, CBS News reported Friday.

Mack and the alleged cult leader, Keith Raniere, have been indicted on charges including sex trafficking and forced labor conspiracy. Raniere has described NXIVM as a “self-help group,” according to CBS News, but investigators say it was a multi-level marketing scheme used as a front for sex trafficking.

“As alleged in the indictment, Allison Mack recruited women to join what was purported to be a female mentorship group that was, in fact, created and led by Keith Raniere. The victims were then exploited, both sexually and for their labor, to the defendants’ benefit,” said federal prosecutor Richard P. Donoghue.

According to court filings, a secret subgroup of NXIVM called “DOS” had levels of women “slaves” headed by “masters.” Mack was allegedly one level below Raniere, who made some of the women brand themselves with his initials.

Another Smallville actress, Kristen Kreuk, has said she left NXIVM years ago and praised the women who exposed the group.

Mack, who could face a minimum of 15 years and up to life in prison, is set to be arraigned on Friday.