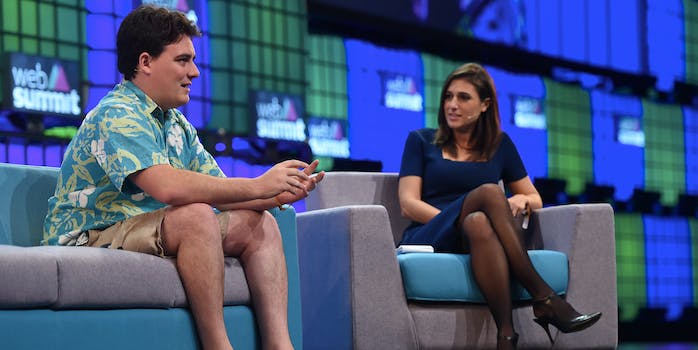 Why was Ted Cruz grilling Mark Zuckerberg on Palmer Luckey?

When Facebook CEO Mark Zuckerberg testified before the Senate on Tuesday, we expected to hear mostly about privacy, Russian collusion, and the role Cambridge Analytica may or may not have played in the 2016 presidential election.

These topics comprised the bulk of the first of two days of testimony from Zuckerberg, but as is often the case with congressional hearings, various politicians have their own axes to grind. In this instance, Sen. Ted Cruz’s (R-Texas) particular blade had to do with a 24-year-old Silicon Valley wunderkind and conservative donor named Palmer Luckey.

As Zuckerberg took questions, he was compelled to admit that Silicon Valley is an “extremely left-leaning place.” He was asked by Cruz if Luckey—who founded Oculus, a virtual reality company bought by Facebook—was fired due to his openly conservative views. The Facebook founder denied this was the case, though he offered little in the way of comment regarding Luckey.

Who is Palmer Luckey?

Cruz, who has shared concerns about the bias of Silicon Valley generally, and Facebook in particular, in the past, offered a barrage of questions around the issue and then attempted to connect previous allegations of political bias to the firing of Luckey.

Palmer Luckey is a particularly sensitive issue for Zuckerberg, as Facebook has not even publicly admitted that Lucky was fired.

The circumstances around his leaving the company remain incredibly murky. Facebook purchased Oculus—best known for their creation of the Oculus Rift VR headset—for $2 billion in 2014 when Luckey was just 21 years old. Luckey left the company in 2016, and he contends that he was forced out.

Shortly before he was removed from the company, it was disclosed in an article at the Daily Beast that he had donated to a pro-Donald Trump group called Nimble America.

Luckey isn’t just some random name that Cruz pulled out of thin air as a means to bang the political bias drumbeat. Luckey is a big supporter of Cruz; he hosted a fundraiser for the Texas senator last year. As Cruz challenger Rep. Beto O’Rourke (D-Texas) emerged on the scene, Luckey asked attendees to contribute up to $2,700 to Cruz’s re-election fund. And he’s backed it with his own donations.

I wonder why Ted Cruz specifically asked Mark Zuckerberg about why Palmer Luckey was fired from Facebook… pic.twitter.com/VAvZuh03Uz

Luckey has made other donations to Republicans as well, including a $100,000 contribution to the Trump inauguration which he attempted to keep anonymous. He may have succeeded, if not for his tendency to name shell companies after references to the video game Chrono Trigger.

Though Luckey is clearly a coveted Republican donor, this isn’t the only way he is supporting the conservative cause. Last June, it was reported that Luckey is developing technology to assist with border control initiatives.

It appears that the technology is still in its nascent stages, but the New York Times reported that Luckey’s new company is “developing surveillance technology that could be deployed on borders between countries and around military bases.” Unsurprisingly, Silicon Valley arch conservative Peter Thiel’s investment fund plans to support the effort.

While it is clear why Cruz might want to speak on Luckey’s behalf as he offers money and innovation to the right-wing cause, Cruz used Luckey to make a broader case about perceived bias in Silicon Valley. Following Zuckerberg’s testimony, some outlets were calling Luckey a “martyr.”

Cruz began this line of questioning asking Zuckerberg about something entirely other than Luckey.

This gave Cruz an opening to ask about Luckey. Zuckerberg would not comment directly on the nature of Luckey’s alleged firing, but he did say, “I can commit that it was not because of a political view.”

The perceived political bias of Facebook and other social media sites has been a cause of conservatives off and on since May 2016. That was when Gizmodo reported that “news curators” at Facebook had a habit of suppressing conservative news items from its trending feed.

In his story, Gizmodo’s Michael Nunez pointed out that this is by no means unusual, writing that “Imposing human editorial values onto the lists of topics an algorithm spits out is by no means a bad thing but it is in stark contrast to the company’s claims that the trending module simply lists ‘topics that have recently become popular on Facebook.’”

There are many people out there who would question the reporting and motives of outlets like Breitbart and the Daily Caller, but it is true, nonetheless, that trending articles from these sites were suppressed.

Sen. Cruz clearly sees a connection between this news and the situation of Palmer Luckey and believes they are emblematic of the feelings Facebook has toward conservatives.