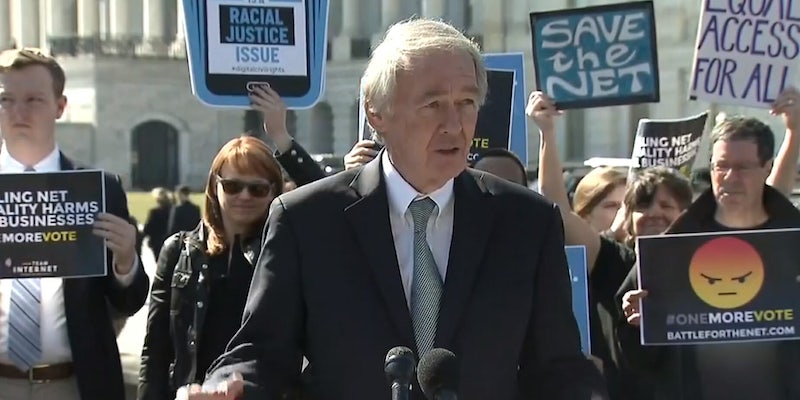 Democrats in Congress announced on Tuesday they have introduced a resolution under the Congressional Review Act (CRA) to overturn the Federal Communication Commission‘s (FCC) decision to rescind net neutrality rules.

The CRA requires a simple majority in both the Senate and House of Representatives to pass. The resolution would then need to be signed by President Donald Trump.

The announcement comes as internet activists, websites, and technology companies are putting on a day-long protest, called Operation: One More Vote, to try and convince lawmakers to sign onto the resolution. Net neutrality, which ensures that all internet traffic is treated equally, was rescinded by the FCC late last year by a 3 to 2 vote.

Currently the CRA has 50 supporters in the Senate–just one vote shy of a majority. In the House, the resolution has 150 co-sponsors. The CRA has just under two months to get the required votes in Congress.

“President Trump and FCC Chairman Ajit Pai might want to end the internet as we know it, but we won’t agonize, we will organize,” Sen. Edward Markey (D-Mass.) said in a statement. “The grassroots movement to reinstate net neutrality is growing by the day, and we will get that one more vote needed to pass my CRA resolution. I urge my Republicans colleagues to join the overwhelming majority of Americans who support a free and open internet.”

One of the organizers, Evan Greer of Fight for the Future, said internet activists will “make sure” lawmakers constituents know how they vote on the CRA.

“Every single US lawmaker has a decision to make,” Greer said in a statement. “Will you listen to the overwhelming majority of voters from across the political spectrum, including 3 out of 4 Republicans? Or will you ignore them, and side with a handful of the most unpopular corporations in America?”

You can learn more about Operation: One More Vote here.