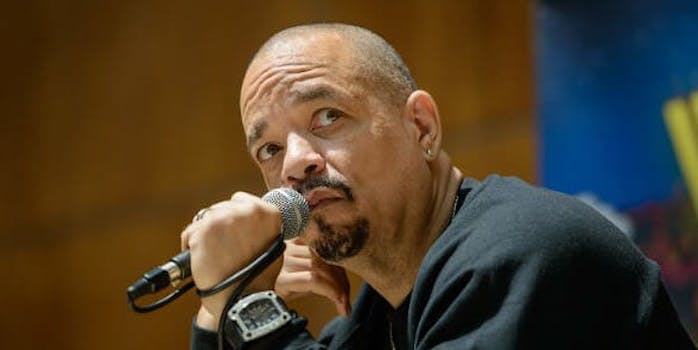 The far-right conspiracy is huge online, and Ice just learned the hard way.

At least it is for Ice-T today. During Ice-T’s internet travels, he happened upon what he took for a spicy meme. He clearly didn’t think too much about it or do any research, he just posted it.

Only later did Ice-T learn of his folly: He’d just posted a QAnon meme.

QAnon is a far-right internet conspiracy that maintains that a secret informant from the government, Q, is posting secret messages teasing President Donald Trump’s great day of reckoning against pedophile Democrats. “Q” signs frequently show up at Trump rallies.

Perhaps feeling a little spicy himself, Ice-T captioned it, “Daily Game: Let the Haters dig their own graves….. #2020.” The meme features a burning Q (his first clue—or it should’ve been) and the quote, “Never interfere with an enemy while he’s in the process of destroying himself.”

People very quickly jumped on the tweet. Lots of comments came from appalled or amused fans. Many others came from the QAnon faithful, most of whom were instantly convinced (as always) that Ice-T had just gotten woke, though not in the way that the rest of the world means it. Some theorized that Ice-T was Q himself. (He’s not. Duh.)

SVU gonna have a 'Q' episode coming up?

Is this a Q anon quote?

This is the best thing ever.

As the realization dawned upon him that he’d just posted a meme from one of the most unhinged and out-of-control far-right conspiracy theories, Ice-T quickly transcended the five stages of Q.

To “wait, what do these guys actually believe?”

And, finally, the stage of “oh my god, you guys, I do NOT like Trump.”

For now it seems that the star of Law & Order: SVU is content to tweet about chilling with his daughter and Snoop Dogg, and take his own advice posted yesterday: “Ice Cold Fact: People are gonna talk sh*t no matter what you do… So you might as well do YOU! F em. #2020.”