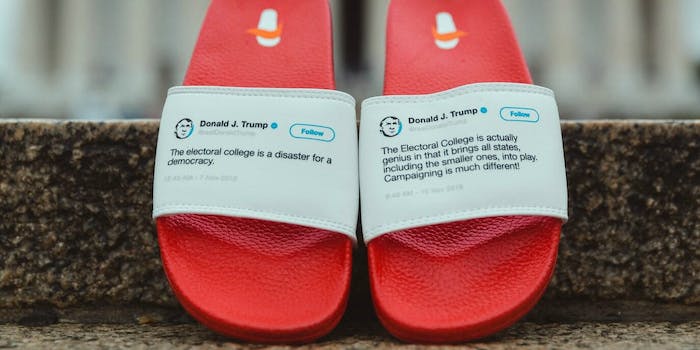 'Going back on your word, one step at a time.'

Though Donald Trump’s website is chock full of strange merchandise for you to buy, chances are you’re not going to find the latest fashion statement hidden among the strange buttons and gold medals. No, if you want to buy a pair of presidential flip-flips—LITERAL presidential flip-flops—you’re going to have to go to presidentflipflops.com for your shopping needs.

With the clever tag line, “Going back on your word, one step at a time,” the purveyors at presidentflipflops.com have some shoes to sell you that feature the best Trump Twitter contradictions you can imagine (though you don’t have to imagine them, because they really happened).

Among the options are Trump’s contradicting thoughts on the Electoral College, Syria, and the media using anonymous sources.

Walk a mile in his shoes and you'll end up doing a split.

When you stand on many sides, many sides of the issue. https://t.co/qimH3lliaD pic.twitter.com/hVSLhsxs3U

The shoes retail for $27.99 and run from men’s size 7 to men’s size 12. But know this: When you slide on these shoes, you’re making much more than a fashion statement. You’re actually revealing your sole.