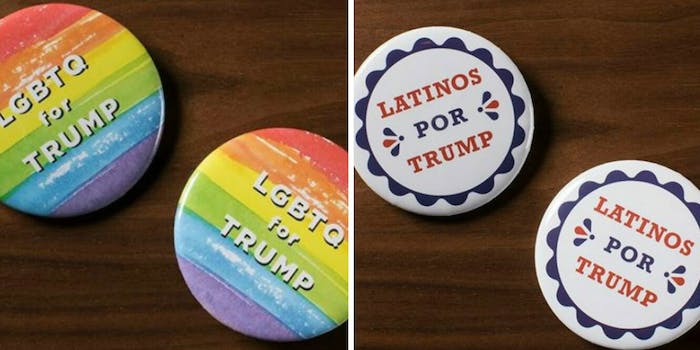 Get your credit cards ready!

Donald Trump is a real estate magnate, a New York Times bestseller, and a noted inventor of words. He’s also the president of the United States.

More than anything, though, Trump is a salesman. Whether you believe he’s the consummate dealmaker or a scummy scam artist, there’s little doubt that Trump uses his charisma, his media manipulation skills, and his ability to say the right things to the right people at the right time to sell you products you never thought you wanted to buy.

Even though he’s now the president, that salesmanship hasn’t halted. You might know Trump is using his website to sell merchandise, and you might have heard about a tiny controversy when he visited Texas in the aftermath of Hurricane Harvey wearing a USA hat that could be purchased for $40 on his official campaign website (you could also just buy a knockoff on Walmart for, like, $10).

Forty bucks for a hat seems rather expensive, especially since it’s not even fitted and because, honestly, it looks as cheap as hell. But if you’re not in need of a head-covering, there are still plenty of others bonkers purchases you can make on Trump’s campaign website. Most of these aren’t as strange as the items you can buy on the websites of heavy metal bands, but the fact you can procure any of these on the president’s website seems rather, well, unpresidential.

Here are our favorites.

The picture you see above is one side of the mug, and the other side features the hashtag #MAGA. If you’re one of the 64 percent of Americans in the latest Gallup poll who don’t approve of Trump and the job he is doing and aren’t sure you want to spend that much on a mug, you can find a similar cup to hold your coffee on Amazon for about $15. Consider it the first step in discovering the art of the deal.

The ornament is made of brass but finished in 24 karat gold. The ornament used to cost $149, but now you can buy it for less than $100 (though there’s a good chance the price could increase as we get closer to the holidays). The fact an ornament with a “Make Christmas Great Again” hat isn’t offered is beyond me.

This might be the least self-aware item on the list (until you get to the buttons for sale below, anyway). Trump has spent a massive amount of his presidency playing golf, and now, you can show your love for the president while hitting the links yourself. You don’t get clubs or a golf bag, though. Or a glove or some MAGA golf balls or a Trump towel. Nope, here’s what your $80 will buy you.

And it’s not even a MAGA photo of Trump playing golf! Maybe just save your money and pay to go golfing yourself with a sock for a driver cover, a dime for your ball marker, and a 5×7 photo of the family you’re abandoning while you chug beers with your buds and ask for mulligans.

After tweeting through his ban on transgender people serving in the military, you have to wonder how this merchandise is selling. My guess: Even at the slashed price of $4 (it used to be $5), probably not well. But it’s probably not the worst selling item on the site. I imagine that spot is likely reserved for this.

After his DACA decision, there’s no way these buttons are a hot item right now.

And the best one of all …

Just what in the hell are you supposed to do with this? Place it on your desk like some 21st century version of Harry Truman’s The Buck Stops Here sign (which you can actually buy on Amazon for $55)? Pin it on your chest like you’re some wannabe David Clarke? Donate it back to Trump to help pay for the border wall? It’s unclear. But Twitter had some comments to make, anyway.

Gold is nice, but not really my color. Do they come impeach?

If $45 for a brass circle is too much to spend, note that it also comes with a “routed wood stand to display the medallion” and a “blue Kraft box with Trump-Pence logo in gold foil and blue insert to hold medallion and routed wood stand.”

See, it’s not a ripoff after all! Just like his presidency.