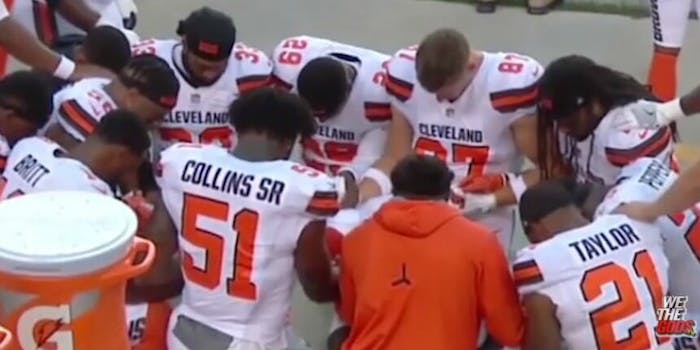 Screengrab via We The Gods/YouTube

About 36 hours after the U.S. president referred to former NFL quarterback Colin Kaepernick as a “son of a bitch” for kneeling during the national anthem, Donald Trump on Sunday morning continued his attacks on the league and the players who protest.

For the third straight day, Trump blasted the NFL and its employees.

If NFL fans refuse to go to games until players stop disrespecting our Flag & Country, you will see change take place fast. Fire or suspend!

…NFL attendance and ratings are WAY DOWN. Boring games yes, but many stay away because they love our country. League should back U.S.

Those tweets continued the theme of his thoughts from Saturday.

If a player wants the privilege of making millions of dollars in the NFL,or other leagues, he or she should not be allowed to disrespect….

…our Great American Flag (or Country) and should stand for the National Anthem. If not, YOU'RE FIRED. Find something else to do!

It’s true: The NFL’s TV ratings were down in 2016. As ESPN’s Darren Rovell notes, ratings were about 8 percent lower last year. But the leaguewide attendance increased in 2016 and reportedly was the third-highest in NFL history and the highest in nine years.

Though there is evidence Kaepernick’s silent protests impacted some people’s decision whether to watch football, it’s certainly not the only reason. The general trend of cord-cutting and the fact that so much airtime was taken up by the presidential election also might have played a role.

Either way, Trump’s tweets made quite an impact on Saturday and Sunday, as players, NFL teams, and the players’ union denounced his words.

The behavior of the President is unacceptable and needs to be addressed. If you do not Condemn this divisive Rhetoric you are Condoning it!!

Wearing an @NFL uniform will not come at the expense of our first amendment right to peacefully protest as citizens. https://t.co/D7jSpssrvN pic.twitter.com/HkxvgCTViy

And though Trump has plenty of allies among NFL owners, at least a dozen teams issued statements in support of their players, including New England’s Robert Kraft, a longtime friend of Trump who donated $1 million to the inauguration last year.

Now the question remains: How will NFL players respond when national anthems are played across the country on Sunday afternoon?

Update 8:43am CT: With the Ravens and Jaguars kicking off Week 3 in London on Sunday morning, we’ve already seen how two NFL teams have responded to Trump’s criticism. Both teams locked arms during the national anthem, and multiple Baltimore players took a knee.

This is Shad Khan, the Jaguars owner who donated $1 million to Trump locking arms with his players during the anthem. pic.twitter.com/T51H1nUDnx

One more of the Jaguars locking arms during the anthem. pic.twitter.com/9eqJc2DBuy