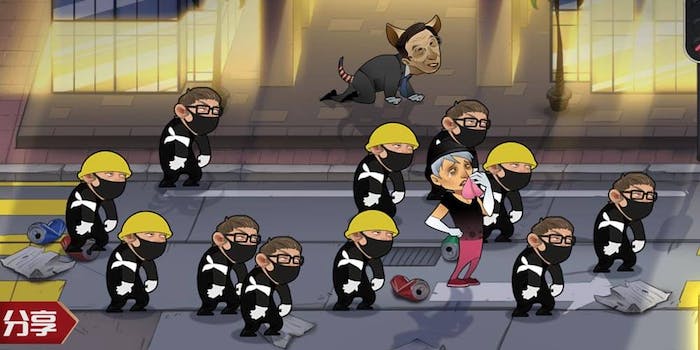 Fight the Traitors Together

A new video game out of China titled Fight the Traitors Together allows players to attack protesters in Hong Kong.

Despite receiving almost zero attention from actual video game enthusiasts in China, the game, available both on the web and for mobile phone, has been widely praised by state-owned media outlet the Global Times.

The game is set on the streets of Hong Kong and lets players attack protesters and even prominent activists with their hands, flip-flops, and baseball bats.

Fight the Traitors Together also uses Chinese government propaganda by showing shadowy characters with American flags on their shoulders paying cash to protesters. The game depicts those protesters being offered cash to kill Chinese police officers as well.

As noted by Vice, the website where the game is hosted does not list any details on its origins. It remains unknown who produced the game and whether the effort is in any way connected to the Chinese government.

The protests, which initially started in defiance of a now-scrapped extradition bill between the semi-autonomous region and the Chinese mainland, has since spawned into a larger movement against China’s attempts to exert influence in Hong Kong.

Protesters are demanding, among other things, investigations into incidents of police brutality as well as democratic voting rights in the region.

President Donald Trump sided with the protesters in late November by signing the Hong Kong Human Rights and Democracy Act. The law mandates that the U.S. place sanctions on both Chinese and Hong Kong officials found to be carrying out human rights abuses in the semi-autonomous region.

The clash between Hong Kong natives and China, which now entered its sixth month, has become increasingly violent. Numerous protesters have been shot by police with live ammunition while those opposed to the protests have been set on fire.