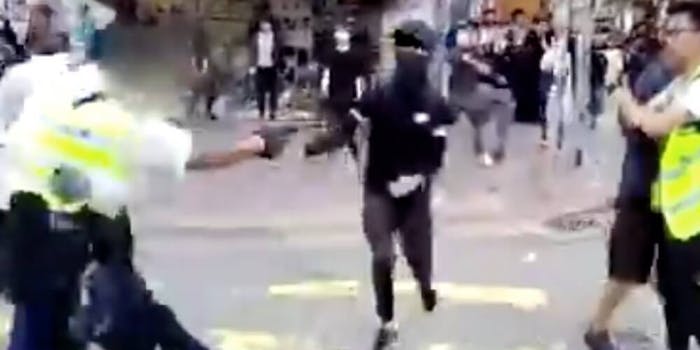 The protester is in critical condition.

A Facebook Live video shared widely on social media shows a Hong Kong policeman shooting a pro-democracy protester at close range on Monday, according to news coverage and tweets about the incident.

The video shows the policeman grabbing another protester, and the young man starts approaching them. The officer holds on to the person he grabbed while pointing his gun at the man coming toward them. The policeman then shoots the approaching protester in the chest area.

Warning: The below video is graphic.

Hong Kong police opened fire with live ammunition at protesters – and it was captured live in social mediapic.twitter.com/NBJ8XAtYnY

The 21-year-old protester is in critical condition and marks the third person shot during the Hong Kong protests.

At least two other violent incidents took place on Monday in other parts of the city. A video shared on Twitter shows a group of people setting a man on fire, who supports the Chinese government. Another viral video on Twitter shows a policeman recklessly driving his motorcycle through a group of people in what looks like an attempt to hit protesters.

Hong Kong police trying to mow protesters down on a motorbike. pic.twitter.com/AC8OsSFOyy

Outraged over the shooting, people began protesting in Hong Kong’s Financial District. The police responded to the uprising by releasing tear gas in the streets.

In response to the incidents on Monday, Hong Kong leader Carrie Lam said in a memo that the government’s main priority is to end the violence and return the city to normal.

“If there is still any wishful thinking that by escalating violence the Hong Kong SAR Government will yield to pressure to satisfy the so-called political demands, I’m making this statement clear and loud here: That will not happen,” she wrote in the memo.

1/3 The only "wishful thinking" is Carrie Lam's repeated assertion that the city can somehow "return to normal."
Forget it… Maybe if she had acted earlier.

Hong Kong protesters and the government have been locked in conflict for about six months. The activists are calling for investigations into police brutality and opposing extradition laws from mainland China.

Facebook told the Daily Dot it allowed a video of this nature to be hosted because it covers an “important issue.”

“We do not allow people to celebrate or glorify crimes on Facebook, though, in some instances when people share graphic content, they are doing so to condemn or raise awareness about important issues. In this case, the video was posted to raise awareness and given this context, does not violate our policies.”