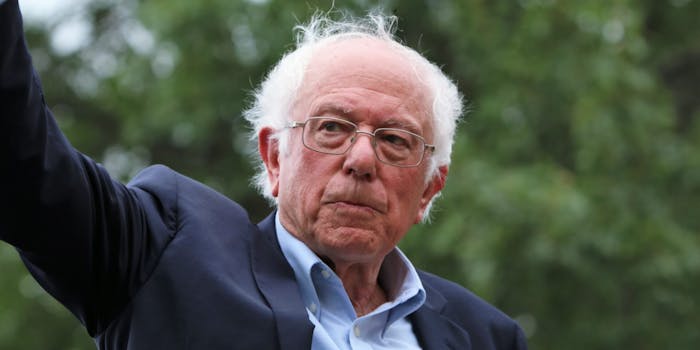 There were no shortage of ideas.

A fresh meme is showcasing Bernie Sanders at his most chaotic.

There are no shortage of Bernie memes online. In fact, the last few years have seen a new Sanders meme emerge almost every month. The latest of these comes to us thanks to a sweet moment from the 2020 Democratic presidential candidate. It stems from a shot of him writing a thank you message to his staff on a whiteboard, which, as we know, provides prime meme material. People online quickly seized the opportunity to imagine a slew of other messages Bernie could have written on the board.

It all started when Bernie’s campaign manager Faiz Shakir tweeted out the image. “A note from Bernie to his field staff,” he captioned the Tweet.

A note from Bernie to his field staff pic.twitter.com/6KYCQUxwyj

Soon, a flood of responses reimagined Sanders’ sentiment. Many of the memes shared online last week illustrated far more extreme political solutions than those Bernie has—thus far—supported. Sentiments like “eat the rich” were not hard to come by.

Other people just reveled in the supreme meme-ability of the image. Messages like “keep baby Yoda safe,” and “cats can have a little salami” were soon credited to the 78-year-old senator.

There were those who took it in a more, erm, sensual direction.

Everyone else just enjoyed the simple, pure humor of the meme. There were no shortage of ideas.

Sanders is currently leading in polls in the New Hampshire primary, with voting underway today.