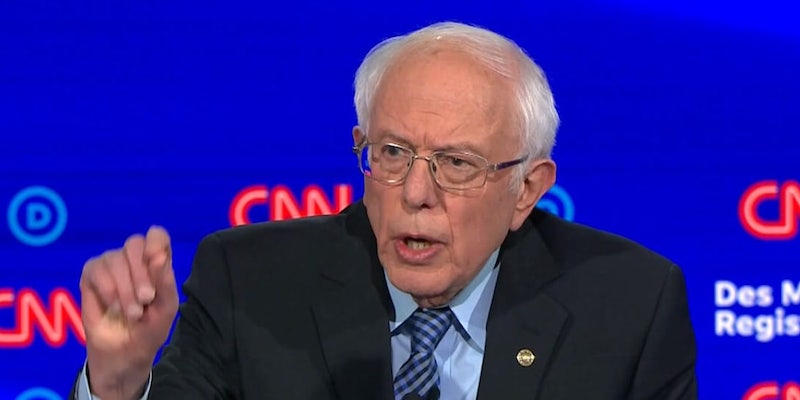 This Bernie Sanders subreddit just banned all content from CNN

Moderators at r/SandersForPresident cite the network's coverage of the presidential candidate.

A Sen. Bernie Sanders (I-Vt.) subreddit has banned all content from CNN over the network’s coverage of the presidential candidate.

A moderator with the r/SandersForPresident subreddit, which has more than 373,000 members, announced the decision on Wednesday following the presidential debate in Des Moines, Iowa.

The post argues that CNN, which hosted Tuesday evening’s debate, has “abandoned their journalistic integrity” in an effort to derail Sanders’ campaign.

“CNN has spent the previous four days using all of its media power to try to prevent Senator Sanders from becoming President,” user Kevin Moore writes. “All of their top-line stories have been unsubstantiated ‘hit job’ style articles against the senator.”

Moore specifically points to a recent report in which CNN claimed that Sanders told fellow candidate Sen. Elizabeth Warren (D-Mass.) during a December 2018 discussion that a woman couldn’t win the presidency. Although Sanders has denied the claim, CNN appeared to frame a question during the debate as if the allegation was undeniably true, causing a backlash online from all ends of the political spectrum. The hashtag #CNNisTrash began trending on Twitter shortly after.

“CNN is not going to stop,” Moore continues. “At a time when America is embroiled in Middle East conflict, when 500,000 people a year are going bankrupt due to medical bills, when an entire generation of Americans is drowning in student debt, and when we house the largest prison population in the world, CNN’s top stories are just new smear articles on Senator Sanders.”

While comments on the post are disabled, members of the subreddit appear to approve of the decision. The post currently has more than 32,400 upvotes at the time of publication. The Daily Dot reached out to Moore for comment but did not receive a reply by press time.

“By ignoring these smears and focusing on the issues that matter to Americans, we are going to win the Presidency,” the post says in closing. “Together, we will transform the United States into a country for all of us, not just the billionaires who control CNN.”

While the subreddit’s ban could eventually be lifted, the post notes that it intends to block all content from CNN for the “foreseeable future.”