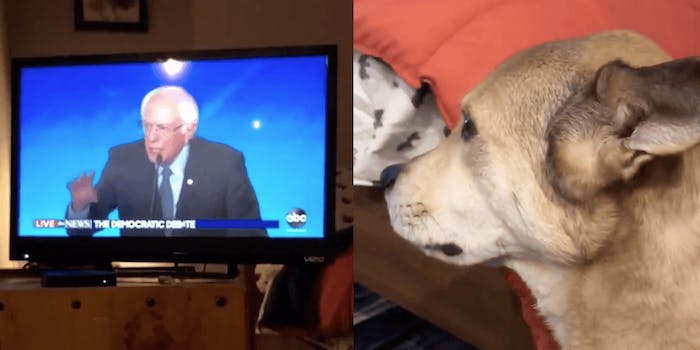 'I've never really seen her respond to the television like that before,' Tuna's owner says.

A dog has gone viral on Twitter after it appeared to endorse Sen. Bernie Sanders (I-Vt.) over former South Bend Mayor Pete Buttigieg in the 2020 Democratic presidential race.

The incident went down while the canine, who goes by the name Tuna, was watching Friday night’s Democratic presidential debate in New Hampshire with her owner Chris Stedman.

The video shows Tuna wagging her tail vigorously as Sanders outlines his position on healthcare. The footage then transitions to the dog sleeping amid commentary from Buttigieg.

The video has since garnered over 762,000 views on Twitter alone, ascending it to viral status. It was even shared by the official People for Bernie Twitter account not long after.

“Tuna knows that the fate of all pets and their families are connected,” the account said.

Tuna knows that the fate of all pets and their families are connected.

Speaking with the Daily Dot, Stedman noted that he actually filmed the footage of his dog sleeping to Buttigieg first but was surprised when Tuna suddenly awoke to the voice of Sanders.

“During Bernie’s response to the final question of the debate, she got up, stood right in front of the television, and began watching and wagging her tail,” Stedman said. “I’ve never really seen her respond to the television like that before.”

Stedman, who then edited the two clips together before posting the final video online, says he believes Tuna may have sensed his support for Sanders.

“I know dogs pick up a lot on the emotions of their humans, so if I had to guess her reaction had something to do with my own,” he said.

Although he knew the video was funny, Stedman did not expect the clip to go as viral as it has.

“You never know how people will respond,” he added. “I thought a few people might like it, but I never imagined the response would be so big.”

Taking advantage of the viral tweet, Stedman promised to give Tuna one treat for every $10 donated to the Sanders campaign by his followers. He notes, however, that after one person gave $500, he decided to space out those treats.

Overall, reactions to the video have been overwhelmingly positive. One person did accuse Tuna of being homophobic for sleeping through Buttigieg’s speech, though.

“The response has been incredibly positive, and the negative replies have mostly made me laugh,” Stedman added. “Someone called my dog homophobic, which is funny on several levels, but largely because I’m trying to remember the last time she was even in the vicinity of a heterosexual.”

As for the next debate later this month, Stedman says Tuna will almost certainly tune in.

“I’m sure she will, though she’d probably nap for less of it if the moderators asked more questions about the issues that matter most to her,” he said.