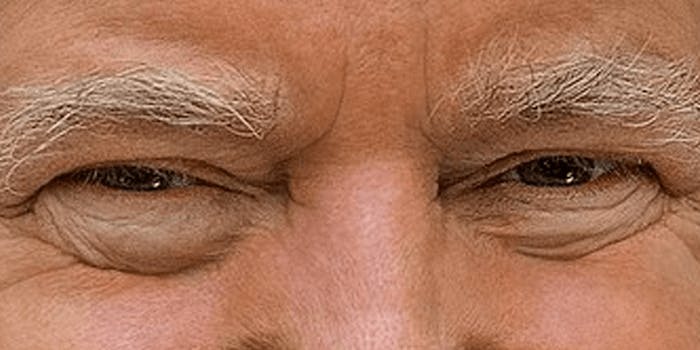 'Tupperware after you store spaghetti in it.'

A picture taken of President Donald Trump on Friday has launched countless memes due to the commander-in-chief’s shockingly orange complexion.

Posted by White House photographer William Moon, the picture quickly went viral and has since been shared More than 11,000 times.

⁦@realDonaldTrump⁩ returns to the White House from Charlotte, North Carolina. Photo by William Moon at the South Lawn of the White House on February 7, 2020 pic.twitter.com/n1a1Z93LrJ

Moon captioned the picture by stating that Trump “was dancing with the sunset and strong winds when he walked to the Oval Office from the Marine One on the South Lawn.”

Trump responded to the image by calling it “fake news” and claiming it is Photoshopped.

”But the wind was strong and the hair looks good?” Trump tweeted. “Anything to demean!”

More Fake News. This was photoshopped, obviously, but the wind was strong and the hair looks good? Anything to demean! https://t.co/t8ptYMCYHf

Those strong winds blew back the president’s comb-over and revealed what many saw as an astonishingly sloppy bronzer job.

“With all those billions, can’t he find someone to blend his girly make-up?” Twitter user @fpsmith303 said.

With all those billions, can't he find someone to blend his girly make-up?

As with any bizarre moment on the internet, the memes were quick to follow. Many agreed that Trump’s look was reminiscent of the volleyball character “Wilson” from the Tom Hanks blockbuster Cast Away.

This isn’t the first time the public has seen this type of makeup. Anyone remember Mrs. Doubtfire?

Maybe he’s born with it.

Maybe he's born with it… pic.twitter.com/1fROhVe2Jl

Others felt major Hunger Games vibes when looking at the president’s glowing face.

But what would Trump look like without all that orange makeup or fake tanner? One user imagined just that by digitally sucking out all the color from Trump’s face. Perhaps the fake tan isn’t that bad after all.

Tupperware after you store spaghetti in it pic.twitter.com/l2Q026Swgj

If all of that wasn’t enough, the photographer later uploaded a black and white version of the same photo.

Today, ⁦@realDonaldTrump⁩ was dancing with the sunset and strong winds when he walked to the Oval Office from the Marine One on the South Lawn.. Photo by William Moon in the White House on February 7, 2020 pic.twitter.com/GURvi4UeSO

And just like the photo, the memes only intensified.

Wtf? Who shares this?! pic.twitter.com/jmeREwPl62

Hopefully the photographer who took the picture won’t be banished from the White House.