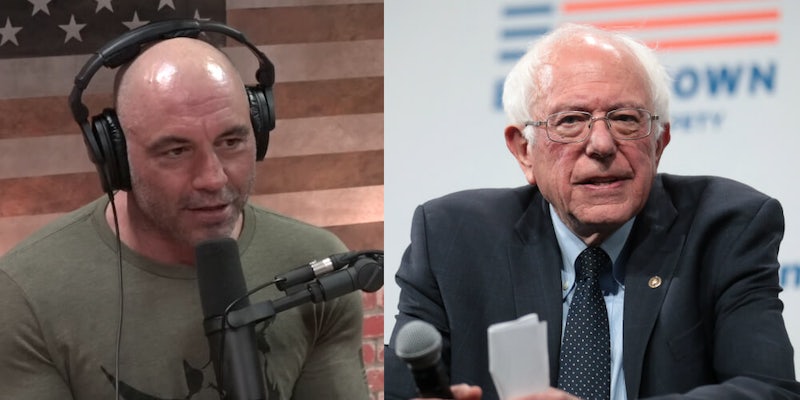 'I don't think I want to have anything to do with politics after this.'

Joe Rogan recently announced on his podcast that he was “probably” going to vote for Sen. Bernie Sanders (I-Vt.) in the Democratic primary. After Sanders touted what was essentially Rogan’s loose endorsement of him, backlash ensued.

While speaking with comedian Mark Normand on an episode of The Joe Rogan Experience on Friday, Rogan addressed the controversy surrounding his endorsement.

“They’re using me to make him look bad that he supports me,” he says in the YouTube video posted by The Joe Rogan Experience clips, where he boasts more than 3 million subscribers. “What this is is take me down to make Bernie look bad because Bernie dared to post one of my videos. In the meantime, Bernie has surged to number one in the polls.”

He added that he had “no idea the Bernie Sanders people” would take his remarks as an endorsement and tout it as they did.

“All I said was that I was going to probably vote for him,” Rogan says.

Rogan reiterated that he likes Sanders’ consistency but admitted that the quality “doesn’t mean he’s going to be a great president.”

In the past, Rogan has been accused of racism, sexism, and transphobia, the latter of which he addressed and tried to push back on the episode. The Sanders campaign has faced its own accusations of sexism since 2016. Most recently, Sanders was accused of telling Sen. Elizabeth Warren (D-Mass.) that a woman could not win the presidency (an accusation he strongly denies). Sanders’ acceptance of Rogan’s endorsement only fueled these accusations.

In the episode clip, Rogan also reiterated that his other favorite Democratic presidential candidates are Andrew Yang and Rep. Tulsi Gabbard (D-Hawaii), both of whom have appeared on his show.

And while Sanders received criticism for amplifying the endorsement, Warren, former Vice President Joe Biden, and Pete Buttigieg were also seemingly interested in appearing on the show, making it seem as if any top Democratic candidate would have been happy with the endorsement or being able to reach voters only obtainable through the podcast host. Rogan decided against inviting them on his show, saying that he would “rather talk to my friends,” referencing Sanders, Yang, and Gabbard.

On his main channel, Rogan boasts more than 7 million subscribers.

“This podcast got way too big, and it can actually influence elections,” Rogan says in the episode clip, before admitting that he doesn’t like that notion. “I don’t think I want to have anything to do with politics after this.”