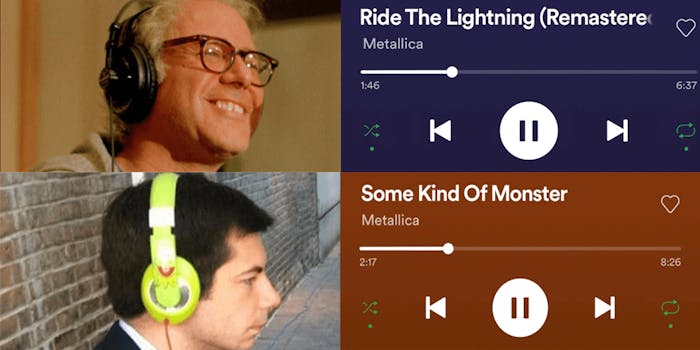 While Sanders jams out to David Bowie and Queen, Buttigieg listens to Vanilla Ice.

The joke appears to have been started with Ken Klippenstein, a reporter for the Nation, who tweeted on Sunday the photo of Buttigieg alongside a screenshot of the Coldplay song “Viva La Vida” being played on Spotify.

The meme seemingly suggests that if the public ever discovered what was on Buttigieg’s Spotify playlist that it would undoubtedly be uncool.

Twitter users immediately began making similar pictures of their own, showcasing the type of audio content they assume Buttigieg would consume.

Everything from songs such as “Lie, Cheat, Steal” by Run the Jewels to “Hip To Be Square” by Huey Lewis and the News were featured. Even the Kidz Bop version of “High Hopes,” the Panic! At the Disco song infamously used by Buttigieg’s campaign, found its way into the mix.

But it wasn’t just music Buttigieg was made to listen to. Others attached odd YouTube videos and weird audiobooks to the meme as well.

The sound of dogs whining and crying, anyone? How about instructions on how to be a human?

Once an image of fellow presidential candidate Sen. Bernie Sanders (I-Vt.) with headphones was discovered, the meme took on an entirely new form. Now, instead of highlighting just how terrible Buttigieg’s listening choices are, users showed just how superior Sanders’ musical taste is in comparison.

Perhaps in the most brutal interpretation of the meme, Twitter user @JordanUhl pictured Sanders listening to the iconic thrash metal song “Ride the Lightning” by Metallica while Buttigieg opted to play “Some Kind Of Monster” from the band’s critically roasted, later-career St. Anger album.

The hits just kept coming. When Sanders chose “Under Pressure” from David Bowie and Queen, Buttigieg chose “Ice Ice Baby” by Vanilla Ice. The aforementioned rap song was famously accused of ripping off the main riff from “Under Pressure.”

As Sanders rocked out to “Killing In the Name” by Rage Against the Machine, Buttigieg cranked up the volume on “Hey There Delilah” by the Plain White Ts.

The meme onslaught hasn’t let up since.

I've been looking for a format for this idea pic.twitter.com/uhhApMVgck

Of course, we don’t know for certain exactly what either candidate is currently jamming. We do know at least that Sanders has been endorsed by everyone from rapper Killer Mike to American hardcore punk band Stick To Your Guns.

And Buttigieg? Well, not too many musicians. But he has been endorsed by high-profile individuals such as actress Gwyneth Paltrow of Goop fame and everyone’s favorite Full House uncle John Stamos. Stamos’ character on the show was in the imaginary band Jesse and the Rippers.