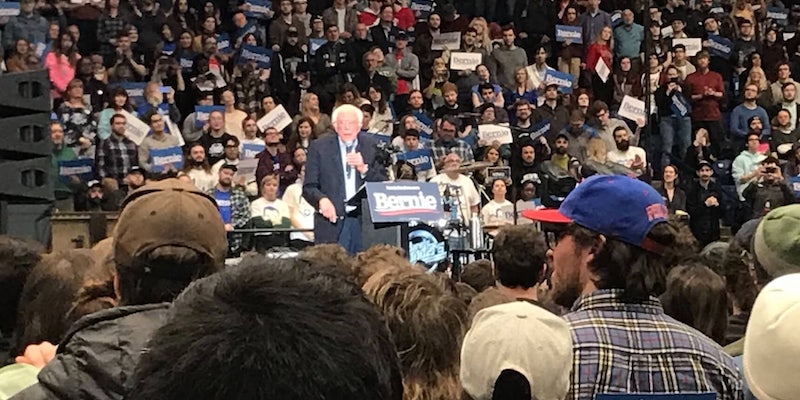 Nixon, Strokes, AOC 'Bern' down the house in New Hampshire.

DURHAM, N.H.—If you’ve been to a Sen. Bernie Sanders (I-Vt.) rally, you might be surprised by what gets the loudest cheers. It isn’t his signature proposal of Medicare-for-all, which has been the foundation of his past two presidential runs.

Nor is it for free college and canceling student debt, despite Monday’s rally on the eve of today’s primary being at the University of New Hampshire, where over 7,500 mostly Gen Zers came to see a septuagenarian man. No, the loudest roars of the evening—the floor and stands erupting in yelps, hollers, and feverish sign-waving—came when Sanders declared his administration would make Amazon pay its fair share of taxes.

The retail giant, which made $11 billion in profit in 2018, paid no taxes on that money.

Another, almost equally as loud, came moments later when Sanders pledged to support any worker who wants to join a union.

It would be easy to believe the Sanders campaign is entirely about a radical imposition of a few policies. Ones that, as the oppositional sayings go, will upend one-sixth of the U.S. economy, or cost $60 trillion, sending the U.S. straight into failed state status.

But attend a rally for Sanders, and listen to the speakers—from longtime Sanders surrogate Nina Turner to newfound fan actress Cynthia Nixon, to, naturally, Rep. Alexandria Ocasio-Cortez (D-N.Y.)—and you’ll see that the policy isn’t what motivates them. Because, as Nixon said, people don’t come out to vote for someone who is “practical. People show up in droves for someone they are passionate about.”

What makes them this passionate, many standing on the floor for nearly three hours, being worked into a tizzy before Sanders took the stage with a blistering introduction from Ocasio-Cortez, isn’t the policy. It’s a worldview.

One that, Nixon said, shows, “we have been taking crumbs, and being told these crumbs are a meal. Bernie has taught us to say: I’m done with these crumbs, I want the whole pie.”

That’s why cheers came louder for missives against Amazon and in favor of unions. A sense of understanding permeated the rally that Sanders wasn’t onstage to deliver you healthcare. That’s almost incidental to his larger goal, which is to wake people up to widespread exploitation.

Take for instance this week’s drama with Amazon. On Monday, Amazon PR head Jay Carney (formerly of the Obama White House), wrote an op-ed in the New York Times about Sanders praising Amazon.

“Listen,” [Sanders] told me, “I just want to congratulate Amazon for raising your minimum wage to $15 an hour. That’s good for your workers. It’s the right thing to do. Please thank Jeff Bezos for me.”

Carney was touting Amazon’s recent decision to pay its workers more across the board, saying it received praise from the senator.

But take a look at Carney’s defense this week. In response to some pushback on whether Amazon really pays that wage, Carney essentially said: What, you think you can get something better?

“Compare our jobs to the alternatives. Find an alternative – not imaginary – that provides the pay and benefits we provide. And, if you want to be a political advocate and not a reporter, I applaud that. I did both. But don’t pretend you’re one when you’re really the other,” he wrote on Twitter.

Compare our jobs to the alternatives. Find an alternative – not imaginary – that provides the pay and benefits we provide. And, if you want to be a political advocate and not a reporter, I applaud that. I did both. But don’t pretend you’re one when you’re really the other.

The money, Carney is saying, should continue to flow to the top.

Amazon’s CEO Jeff Bezos recently lost half his net worth in a divorce and still is one of the world’s richest men. And his top PR person is saying to everyone out there, “this is what you are stuck with.”

Supporters of Sanders have finally said “no” and they won’t stop saying “no,” because the only way to achieve something is to fight against it with everything you’ve got.

That’s why when another candidate says the solution to a problem is negotiating with drug companies to lower prescription prices, or reinvesting in job training for workers who have been laid off, it draws scorn from Sanders fans.

What they’re hearing is a candidate saying, “Vote for me. I can get you bigger crumbs.”

What they are hearing Carney say out loud is “just try getting better than $15 an hour. That’s the world, that’s your tough shit.”

If you believe the only practical fix is properly distributing these crumbs, then yes, Sanders won’t resonate for you. But if you look around and see that it’s not just you getting crumbs or someone else you know, but it’s millions of people out there, you’ll start to see why Sanders fans have developed such a passion for the man.

And that’s the tenet of his campaign: “Not me, us.” Because maybe you do have it alright, and would be good with things just being a little bit better. But just making everything is a little bit better for you isn’t good enough, not when things are so bad, not when everyone needs things to be a lot better.

The second headliner of the night, the Strokes, came out onstage playing New Hampshire, as Sanders noted, for the first time ever.

And when they started, they didn’t open with one of their hits. They kicked off with a rendition of the Talking Heads’ “Burning Down the House.”

The “Bernie” pun is impossible to ignore, but the message is more than just that.  Famous as the Strokes are, it’s not just them who can do it for Sanders. We all need help.