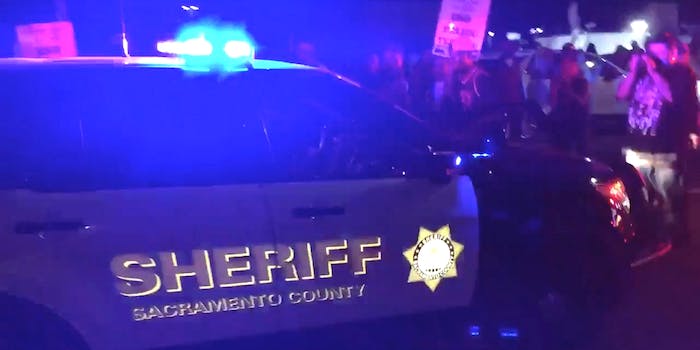 Activist hit by a police cruiser during protest for Stephon Clark

Witnesses characterize it as a hit-and-run.

A Sacramento protest for Stephon Clark, the unarmed Black 22-year-old fatally shot by police last month, turned violent on Saturday night when a local activist was hit by a police cruiser. The protester, identified as 61-year-old Wanda Cleveland, was hit in her right leg and has been treated for injuries to her arm and the back of her head, according to the Washington Post.

Video of the moment shared on Twitter is graphic, showing a Sacramento County sheriff police car begin to take off after a deputy commands protesters to back away from the vehicles through a loudspeaker.

Cleveland, who was walking in between cruisers, is in its path, and she puts her hand up to indicate to the driver to stop as she continues to move out of the way. The vehicle continues, hitting Cleveland in the leg. She falls to the ground as other protesters, including the person who took the video, begin to cry out for her. A longer video shared by ABC10 doesn’t show deputies returning to the scene.

On the night of the protests, Cleveland had recalled her arrest three years ago for touching a police officer during a tense city council meeting. She detailed the arrest as unjust, but said she was on a mission to “never allow a cop to touch [her] again.”

Multiple witnesses characterized the incident as a hit-and-run, with a friend of Cleveland’s who helped her after the accident saying the officer was upset protesters weren’t moving, so he hit her.

A statement from the sheriff’s department described the collision as happening at “slow speeds,” surrounded by protesters “yelling while pounding and kicking the vehicles’ exterior.” The incident is being investigated by the California Highway Patrol, with the department conducting an internal review.

The protest leading up to the incident was a “quiet vigil” for Clark, with more people joining after hearing about Cleveland being hit on social media. Protesters marched to the Sacramento County Sheriff’s Department, but had been met with police and squad cars blocking the building. So instead, protesters blocked the main intersection in front of the building and spoke into a makeshift PA system, sharing their stories.

Guy Danilowitz, a public defender and legal observer, shot the video and had attended the protest to document cases of civil rights violations by police. He told the Post that he and other observers will typically hold onto footage taken, but he felt the incident was “so egregious” that he had to publish it online. Danilowitz said if a civilian was involved in such a collision, he might be charged with crimes such as assault with a deadly weapon and violation of a law that requires drivers to stop and get medical attention.

Cres Vellucci, Sacramento’s observer coordinator, told the Post he tried to flag down a California Highway Patrol officer to notify of the potential crime but was told to vacate or face arrest.