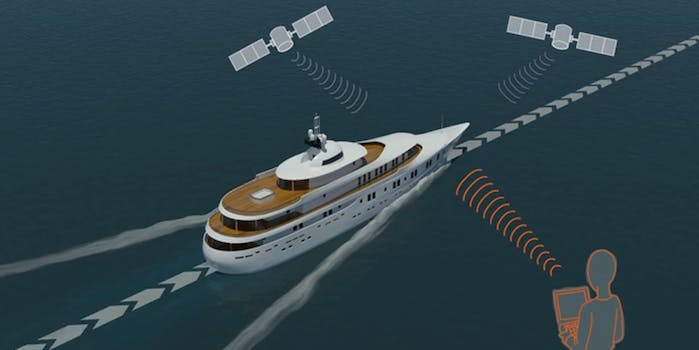 Using GPS spoofing techniques, you too can command an $80 million yacht.

Who would want to spend countless hours at sea in hopes a boat laden with bounty happens to sail on by when you could just sit on your backside and redirect the vessel?

A group of University of Texas students at Austin’s Cockrell School of Engineering, guided by professor Todd Humphreys, demonstrated how to impersonate the Global Positioning System (GPS). The world-wide standard for satellite navigation helps people all over the planet figure out where they are and how to get to where they’re going.

Last month, the team sent fake GPS signals to a ship, overriding the real GPS data. In doing so, they took almost total control of a multi-million-dollar yacht, telling it where to go. By signalling to the yacht that its current course was the wrong one, the team forced the crew into corrective action, taking the vessel off-course and toward where the team wanted it.

The team created a YouTube animation showing how their plot was successful.

The experiment was carried out with permission of the yacht’s owners, so there was no crime here. Spoofing the GPS data in this way did not trigger any alarms, and highlights the danger that real criminals might use such a tactic to disrupt the flow of the world’s shipments.

At sea, ships rely almost entirely on GPS data, while pilots largely figure out where they’re going based on satellite positioning.

A 2011 University of Oklahoma research paper, highlighted by the Houston Chronicle, suggests some fixes to the issue. In the meantime, it might not be a bad idea to rely on ol’ paper maps or asking for directions to figure out how to get to your destination.