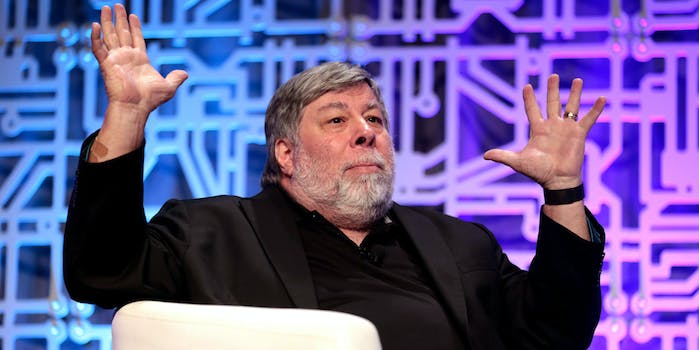 Steve Wozniak, the man who created Apple with Steve Jobs, is joining the #deletefacebook campaign.

Speaking with USA Today, the eccentric entrepreneur explained he is abandoning the social network out of concern for how it handles the personal information of its 2.2 billion users.

“Users provide every detail of their life to Facebook and… Facebook makes a lot of advertising money off this,” he told USA Today. “The profits are all based on the user’s info, but the users get none of the profits back.”

Wozniak said he had deactivated his account but would not delete it entirely in order to keep control of his screen name stevewoz, “I don’t want someone else grabbing it, even another Steve Wozniak,” he said.

Before his account went dark, Woz sent one final goodbye to his friends.

“I am in the process of leaving Facebook,” he wrote. “It’s brought me more negatives than positives. Apple has more secure ways to share things about yourself. I can still deal with old school email and text messages.”

Facebook has been under loads of pressure the past few months after it was revealed to the public that political data firm Cambridge Analytica stole the personal information of 87 million users to influence their vote. In the weeks following the revelation, Facebook lost more than $100 billion in market value. Its CEO, Mark Zuckerberg, will testify before Congress on Wednesday to explain how the scandal unfolded and try to convince the world that it won’t happen again.

Woz went on to praise Apple for how it protects user data. “Apple makes its money off of good products, not off of you,” Wozniak said. “As they say, with Facebook, you are the product.”

Wozniak’s claims about the company he built aren’t unfounded. Its stance on protecting user information from third parties has been well-documented—at least in the U.S. (Its efforts in China are another matter.) Apple has, on multiple occasions, stood up to federal agencies requesting that it provide a backdoor to bypass encryption. Wozniak, a founder of the Electronic Frontier Foundation, praised Apple in a 2016 interview on Conan when the FBI famously tried to access the iPhone 5c of San Bernadino shooter Syed Farook.

His statement also appears to be a response to Facebook COO Sheryl Sandberg, who said last week that if Facebook stopped collecting data from users, it would be a paid service. While it claims to not sell personal information directly to advertisers, it relies on that data to better target ads.

Wozniak isn’t the only tech leader to slam Facebook for its struggles to protect the massive amounts of information it has at its disposal. In fact, it was current Apple CEO Tim Cook who kicked things off last month in an interview with Recode when asked what he’d do if he were Zuckerberg.

“I wouldn’t be in the situation,” said Cook, who previously called for regulations on Facebook.

Zuckerberg fired back, calling the statement “extremely glib” and explaining that ads are a way to offer its service for free so it doesn’t only serve “rich people.”

Starting today, Facebook will tell users whether their information was exploited by Cambridge Analytica. You can read our guide to figure out whether your data was affected by the scandal.

Correction: An earlier version of this article misidentified the CEO of Apple. It is Tim Cook.