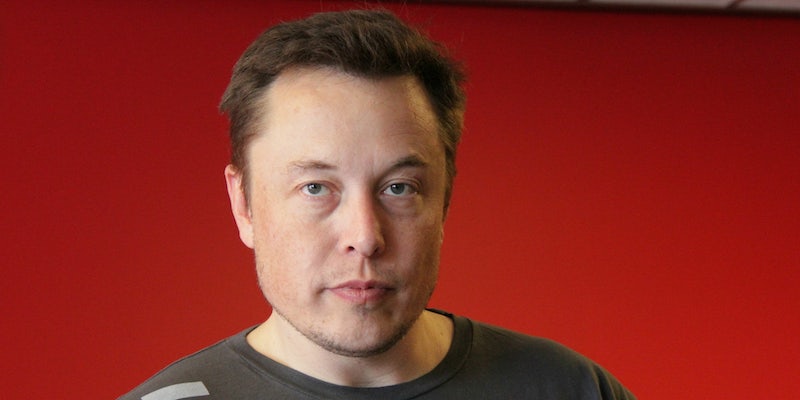 Elon Musk is onboard the #deletefacebook train.

In his eccentric style, the SpaceX and Tesla CEO deleted his company’s Facebook pages following a thoroughly awkward Twitter exchange. It all started when WhatsApp Co-Founder Brian Acton posted a succinct call-to-action: “It is time. #deletefacebook.” A few days later, Musk let off one of his classic one-liners to no one in particular: “What’s Facebook?” he wrote.

Musk zinged back, “I didn’t realize there was one. Will do.”

I didn’t realize there was one. Will do.

True to his word, Musk on Friday deleted both Tesla and SpaceX Facebook pages, which had a combined following of more than 5 million people. The two corporations used their profiles to provide updates to users and were reliable destinations to watch livestreams of car unveilings and rocket launches.

Those who visit the site will now encounter a message that says, “Sorry, this content isn’t available right now.”

When asked about Facebook subsidiary Instagram, Musk said it was “borderline” and that “FB influence is slowly creeping in.” Musk regularly posts photos on Instagram, giving his nearly 7 million followers an inside look at his everyday life. Nowhere in the conversation did Musk specifically mention Cambridge Analytica or Facebook’s privacy woes.

It’s unclear whether the pages will ever return.

Musk is the latest high-profile executive to denounce Facebook for failing to protect user privacy. The social network has faced backlash in the past week after leaks revealed political data firm Cambridge Analytica exploited personal information from 50 million Facebook users.

CEO Mark Zuckerberg apologized for his company’s involvement in the data breach and promised to prevent it from happening again. He also told CNN that he’s willing to testify in front of Congress.