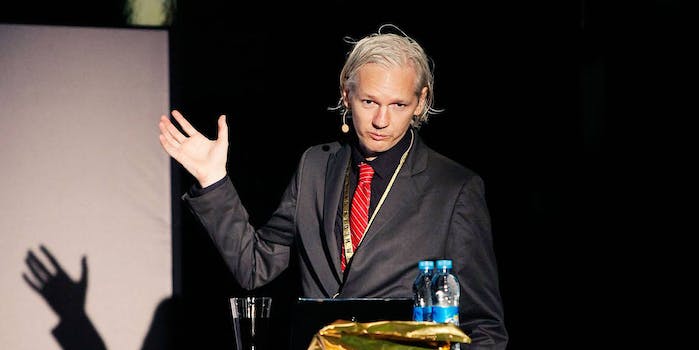 In a tweet on Friday afternoon, the official account of the radical transparency group WikiLeaks asked it supporters to halt a massive distributed denial of service (DDoS) attack that brought down many of the internet’s most popular websites.

Mr. Assange is still alive and WikiLeaks is still publishing. We ask supporters to stop taking down the US internet. You proved your point. pic.twitter.com/XVch196xyL

That same morning, Dyn, which manages the Domain Name System (DNS) for sites like Twitter, Spotify, and Netflix released a statement that its servers on the East Coast of the United Sates were being flooded with fraudulent traffic.

The attack began around 7am ET and has led to the affected sites having accessibility issues throughout the course of the day.

The attack is believed to have been carried out by a botnet called Mirai, which uses Internet of Things enabled devices, such as wi-fi routers and web cams, to send voluminous amounts of traffic. The same botnet was also reportedly responsible for an attack against the website of prominent and influential cybersecurity blogger Brian Krebs.

Shortly after WikiLeaks tweeted its message, Dyn posted a status update to its site proclaiming, “This incident has been resolved.”

No direct evidence has been presented as to why WikiLeaks believes its supporters were behind the attack. A request for comment was not immediately returned.

However, controversial WikiLeaks founder Julian Assange is in the midst of an intense public spat with the United States government. Assange, who has spent the past four years holed up in London’s Ecuadorian Embassy evading participation in a Swedish sexual assault investigation, recently had his personal internet connection temporarily restricted by the Ecuadorian government.

In a statement released earlier this week, Ecuadorian officials said they made moves to limit Assange’s internet access following WikiLeaks’ publication of troves of emails stolen from senior Democratic party officials in an attempt to damage the presidential campaign of former Secretary of State Hillary Clinton and boost the chances of former reality TV star Donald Trump. The Obama administration has formally accused senior officials in the Russian government as  being responsible for the breaches of the party’s computer systems, but WikiLeaks has pushed by against those assertions.

While Ecuador insists it came to this decision entirely on its own and the U.S. State Department told the Daily Dot as much in a statement earlier this week, Assange has charged the move was a direct of diplomatic pressure applied by Secretary of State John Kerry.