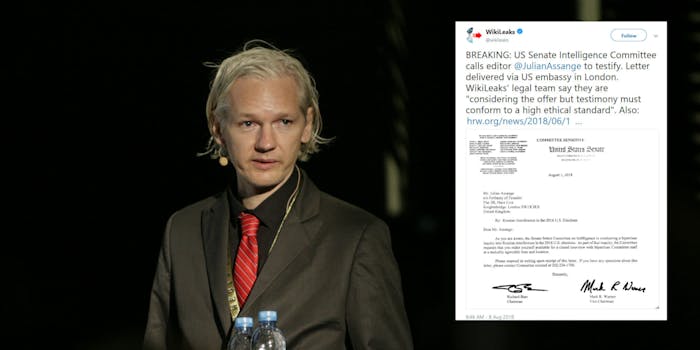 WikiLeaks posts letter from Senate asking for Assange to testify

WikiLeaks tweeted a picture of a letter signed by Sen. Richard Burr (R-N.C.) and Sen. Mark Warner (D-Va.) that asks him to testify as part of the committee’s investigation into Russian interference in the 2016 presidential election.

“The committee requests that you make yourself available for a closed interview with bipartisan committee staff at a mutually agreeable time and location,” the letter reads.

BREAKING: US Senate Intelligence Committee calls editor @JulianAssange to testify. Letter delivered via US embassy in London. WikiLeaks' legal team say they are "considering the offer but testimony must conform to a high ethical standard". Also: https://t.co/pPf0GTjTlp pic.twitter.com/TrDKkCKVBx

The organization said its legal team is “considering” the request, but wants it to “conform to a high ethical standard.”

In May, an associate of Assange said he would speak with members of Congress as part of its Russia probe, according to the New York Daily News.

His associate, radio host Randy Credico, said Assange would speak with Congress if they traveled to the Ecuadorian embassy in London.

The WikiLeaks founder has been there since 2012.