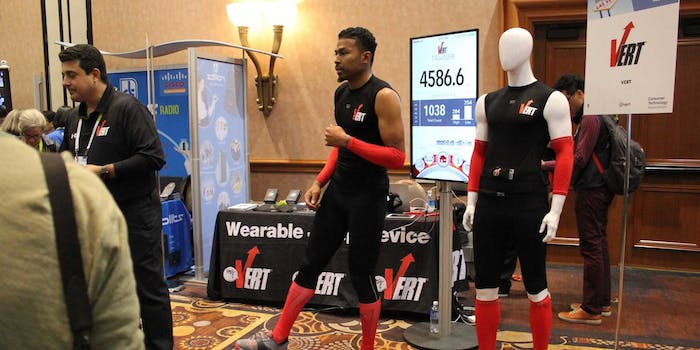 Meet the companies that want your clothing to track your fitness

It's becoming popular with college athletes for a very good reason.

When a coach says “jump,” they expect their athletes to say “how high?” Thanks to Vert, they can get a pretty precise answer. The wearable fitness tracker measures an athlete’s vertical jump, and at CES the company unveiled its plan to jump to the next level.

The aptly named Vert 2 was on display at CES 2016, put to use in a live demonstration by a variety of athletes, and it does more than just monitor jump heights. The refreshed version of the technology keeps track of the frequency of intense movements as well as the intensity of the movements themselves.

We are all about activity here at #CES2016. Russian gymnastic trio with Vert. pic.twitter.com/11wmEhX88t

In all, the tracker is capable of capturing 50 simulations simultaneously and analyzing them in real time to produce an exceptionally clear picture of overall performance. That information is nearly as valuable to the people people watching the athletes as it is to the athletes themselves.

Just last month, Vert became the first wearable to be used in an NCAA Championship game. The universities competing in the NCAA Division I Women’s Volleyball Championship games equipped their players with the wearable, and the data was used to improve the analytics offered by ESPN 2’s television coverage of the event.

Multiple NCAA programs, both in volleyball and basketball, have started to work Vert’s unique tracking information into their training. Vert founder and President Martin Matak told the Daily Dot the NCAA has been “very progressive” in its dealings with wearables and is embracing the new technology.

Vert 2 will expand on those functions, and make the already unobtrusive device even more integrated into an athlete’s gear thanks to a partnership with compression clothes company Zensah. The Vert technology will be worked into the workout gear to gather information without interfering with the athlete.

A consumer version of the Vert 2 will be available starting in May 2016. No price point on the device has been announced yet. The existing model retails for $124.99.