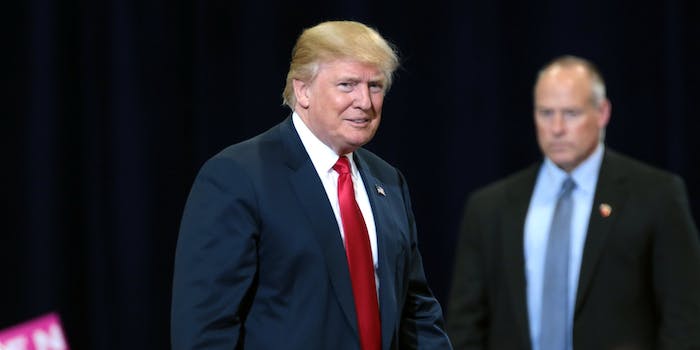 Save America also incorporates Section 230 protections in its terms of service.

In a move that is definitely not the saddest thing ever, yesterday former President Donald Trump launched his own sort-of social media site. He’s already breaking his own rules.

“From the Desk of Donald J. Trump” is billed as a social media platform. In reality, it’s more accurate to call it a blog, as it’s just a section of his website and Trump is the only person who can post on it. The site currently resembles a carnival funhouse version of his Twitter feed. Seems llike he needed something to do with his time since he was suspended from Twitter and Facebook.

The good times of firing barbs like “warmongering fool” at his chosen enemies technically shouldn’t last. Trump is bound to break the rules of his desk, as the site’s terms clearly prohibit some of his favorite Twitter flexes: libel, defamation, harassment, threatening, doxing, invasion of privacy, abuse, deception, and lying. If his blog enforces the rules, when he calls someone a dog or “psycho” or falsely accuses them of murder—all things Trump has actually done on Twitter—he should be kicked off.

In fact, Trump’s already violated his desk’s terms of service by lying about voter fraud, falsely claiming the election was stolen from him, and hurling insults at Sen. Liz Cheney (R-Wy.).

Also prohibited is the very thing that got him booted from Twitter in the first place: encouraging people to do crimes. (Remember the Capitol riots? The FBI does.)

Close observers may recall that Trump gloried in railing against Section 230 of the Communications Decency Act, which broadly immunizes websites from being sued for content on their platforms. Like many in his party, Trump inaccurately claims that Section 230 infringes on freedom of speech. In reality, Section 230 enables websites to allow users to post freely, so long as whatever they say doesn’t break the rules, without the site fearing getting sued.

Trump may claim to loathe Section 230, but that didn’t stop him from incorporating its terminology into his own platform’s terms of service.

“As a provider of interactive services, Save America is not liable for any statements, representations, or User Content provided by its users in any Interactive Area,” the terms state. (Save America is Trump’s a joint fundraising committee.)

The irony wasn’t lost on some astute Twitter users.

“Guess he really didn’t want to repeal Sec 230 after all,” commented Josh Sternberg.

In the event that Trump converts his blog to something other than a doppelgänger of the Twitter account that once was, he can rest assured that Section 230 will protect him from lawsuits.