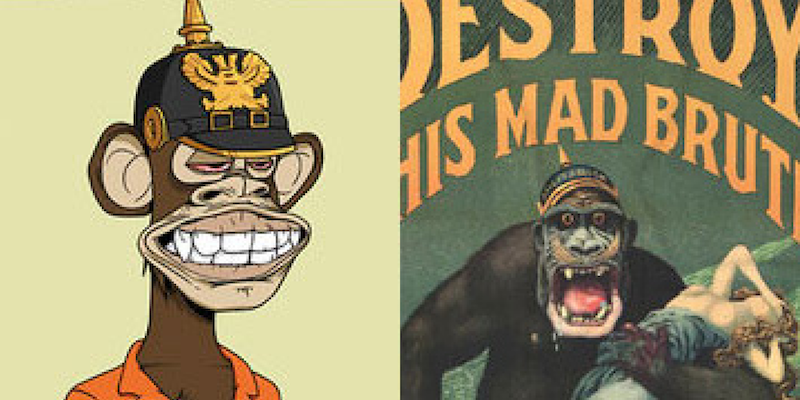 The group has faced myriad accusations.

Allegations around BAYC and its founders have been percolating for months, and have been spearheaded by Ryder Ripps, a conceptual artist and creative director. Ripps is now being sued by Bored Ape and YugaLabs, which own BAYC, over parody NFTs Ripps created.

The lawsuit, filed against Ripps by YugaLabs, brings claims of trademark infringement and false advertising against Ripps for making his own set of NFTs directly based on BAYC NFT images. Ripps launched what he calls a “satirical” NFT collection, marketed as “RR/BAYC” in May. Yuga says that Ripps is flooding the market with his NFTs and inherently devaluing the value of the BAYC collection.

The BAYC collection is a collection of unique, non-fungible digital artwork depicting algorithmically generated monkeys in various outfits and moods. Owners of a Bored Ape are granted exclusive access to their ape. NFTs have become a speculative digital asset as hopes for the metaverse have grown, but have just as equally faced accusations of being speculative pump-and-dump schemes.

In an interview, Ripps said the move to create a parody of BAYC was an effort to “hold a mirror to the images in the Bored Ape Yacht Club as a new mint to raise awareness about Yuga’s racism/antisemitism.”

Ripps NFTs match the drawings of BAYC and are often sold on the same platform, Open Seas, using branding that BAYC says is trademarked.

Ripps has moved to dismiss the lawsuit, and in a recent filing, doubled down on his belief in the racist nature of BAYC, saying the group was ”drawing from neo-Nazi culture and racist communities within forums like 4chan.org/pol/—while simultaneously racking up celebrity endorsements.”

In his anti-SLAPP motion, Ripps attorneys say that: “The racist dog whistles that Yuga has embedded in BAYC and associated projects are too numerous to catalog here.”

The suit goes on to say that “Yuga’s systematic use of racist and neo-Nazi messages and imagery appears to be by deliberate design, and, by its co-founder’s admission are not ‘just random.’”

Ripps’ attorneys say that he is exercising his right to free speech in using the BAYC’s work to highlight his concerns with the problematic imagery in the apes.

The video has over 1 million views at the time of writing.

Just this weekend, the hacking collective Anonymous released a video vowing to investigate BAYC over the group’s potential Nazi ties, though some have alleged the video is fake.

Ripps alleges in the motion to dismiss that BAYC’s logo and individual ape NFTs use esoteric and religious symbolism commonly used by racists on imageboards like 4chan and 8chan. He also says that YugaLabs, the company that launched BAYC and owns CryptoPunks, created its name from Kali Yuga, a South Asian religious idea turned popular alt-right ideology.

Twitter user @Pauly0x pointed out that one of the BAYC cofounders was in a Telegram group chat called “Kali Yuga Surfing Club,” which used the similar religious imagery coupled with Nazi symbolism.

@Pauly0x is the handle of Jeremy Cahen, the founder of NFT marketplace Not Larva Labs and a co-defendant in the Yuga trademark lawsuit.

Ripps’ motion says that “‘Surf the Kali Yuga” as a phrase is “an esoteric way of saying enjoy sin and embrace conflict” that has been embraced by the far-right.

Content within the NFTs—such as the Prussian helmet some apes wear, which features a symbol from the Imperial German flag—has been called out by Ripps. Other ape costumes, like ones featuring a Russian military hat or others wearing a Fez, are popular in far-right Pepe memes, according to Ripps.

On the website Ripps maintains about BAYC, he also alleges the pseudonyms used by the founders have dark undertones. Greg Solano, one of the co-founders of BAYC, went by Gargamel on Twitter, referring to a character from the Smurfs who is recognized as an antisemitic depiction of a Jewish person. The term is also used on 4chan to derogatorily refer to Jews.

Another co-founder, Kerem Atalay, uses the name Emperor Tomato Ketchup, the title of a 1971 film that was banned in some countries for depicting a boy in a facist uniform raping an adult woman. A third co-founder, Wylie Andrew, goes by the name Gordon Goner, which Ripps alleges is an anagram for Drongo Negro. Drongo is popular 4chan slang for “stupid.” Lastly, Ripps alleges the fourth co-founder SASS uses a combination of SA and SS, the Sturmabteilung and Schutzstaffel, two violent branches of Adolf Hitler’s military and police state.

The founders have previously attempted to explain their names in interviews. Aronow chose Gordon Goner because it “sounded like Joey Ramone” and Atalay said he chose Emperor Tomato Ketchup from the 1996 Stereolab record, which is itself named after the 1971 film. Solano has two stories for the Gargamel name, telling Rolling Stone that it was a joke because his fiancée had never seen the Smurfs, but also said in a YugaLabs letter addressing Ripps allegations that the name came from the StarCraft series and the “smurfs,” which refers to cheaters in the game.

Others have made similar accusations about the names.

In an interview, YugaLabs CEO Nicole Muniz was asked about the accusation of racist tropes.

She said that the collection was started as a silly, whimsical story and highlighted the diverse backgrounds of the creators, noting one was Jewish. “The idea that we’re neo-Nazis or alt-right is offensive, it’s hurtful, it’s totally untrue.”

“We will not justify these ridiculous questions with a response,” a Yuga Labs spokesperson told the Daily Dot. “We’ve already responded on this matter. The conspiracy theory is unfounded and defamatory.”

In an interview with the Daily Dot, Ripps said his suspicions of BAYC began last November.

“I am constantly surprised by the lack of accountability on part of YugaLabs and the press at large in terms of addressing glaringly obvious problems in their collection and the inherent racism throughout their work,” he said.

Ripps said he has had no formal communication with BAYC since December 2021 when the manager of BAYC, Guy Oseary—who also manages stars like Madonna and U2—”made it clear that speaking out about these issues could hurt me.”

Fredrick Brennan, who founded 8chan in 2013 before distancing himself from it, similarly believes there are issues with the BAYC.

“It’s totally clear to me that it’s racist,” he said in an interview with the Daily Dot. “It could not be more clear that they’re Channers. Takes one to know one.”

Brennan is referring to 4chan, the online shitposting site that is at the forefront of a number of racist, trolling movements on the internet. Users often make racist images and comments that they say can be explained away as joking or trolling, and the onus is put on the viewer or user for not getting the joke. The site is heavily imbued with a sense of irony that can help dismiss any claims of ties to racism or offensive imagery.

But those who are familiar with the BAYC content are convinced there is a clear message sent from the founders with their choice of images.

Brennan—who has been skeptical of NFTs in the past—wrote two Medium articles that go into detail about his feelings towards BAYC.

“I add my voice primarily to establish it as a fact that BAYC contains racist dog whistles, and to encourage people to think in a more nuanced way about the founders and the potential motives,” he wrote.

Brennan pointed out, as did Ripps in his motion to dismiss, that the BAYC logo has elements of the Totenkopf, a German skull and crossbones insignia used by Nazis. Although there are some differences, the main elements—18 teeth on the skull and a rough-edged black circle—are the same.

Other claims of BAYC’s ties to racist ideology dot the internet. Wylie Aronow has links to Manuel Marrero—editor of “alt-write” publisher ExPat Press—according to a recent interview with metaverse and web3.0 expert Wave Ninja as well as deleted tweets reviewed by the Daily Dot.

Aronow claims that Marrero is a childhood friend and “not a Nazi” in the interview, but under ExPat Press, Marrero publishes far-right and Nazi writers and viewpoints, and one author on the site is a self-proclaimed Nazi. Marrero has published writings about pedophilia dating back to 2013, and has published increasingly grotesque writings in recent years, some of which involve sexually explicit content with babies and children.

In deleted tweets from Aronow’s old account, provided to the Dot by Brennan, Aronow has the username “Push, the bully” the main character from a book—A Poetics for Bullies by Stanley Elkin—that follows a racist and xenophobic bully.

Another BAYC cofounder, Greg Solano, has also been published by Marrero. Marrero did not immediately respond to a Daily Dot request for comment.

Wave Ninja, an NFT enthusiast and self-proclaimed metaverse expert, started out as a skeptic of Ripps’ claims, but has since changed his tune and joined the community to voice criticism against BAYC.

“People have been calling this stuff out since day one,” Wave said in an interview. “I think the community deserves the truth. Yuga is a massively powerful entity. People underestimate how much of a power grab they are making in the digital space. Their actions matter to us all. Tomorrow is too late to tell the truth.”

YugaLabs was founded by Aronow and Solano in February 2021 before launching BAYC in April. YugaLabs went on to make $127 million in 2021, and in 2022 they bought the popular CryptoPunks and Meebits NFTs and announced a new metaverse project called Otherside.

As a way to get the word out about his criticism of BAYC, Ryder Ripps created the satire NFT project called RR/BAYC. He used re-minted images of existing BAYC NFTs as a protest against his alleged racism within BAYC.

“This lawsuit is an attempt to silence an artist who used his craft to call out a multi-billion-dollar company built on racist and neo-Nazi dog whistles,” Ripps’ anti-SLAPP filing said.

The filing also claims that there are other copycat NFTs, but that Yuga has not launched suits against any of them.

“This lawsuit is the latest Yuga attempt to bully Mr. Ripps into silence,” the filing alleges. “There are dozens of entities that create knock-off ape NFTs that make no artistic or critical commentary. Tellingly, Yuga has not sued any entities that are intentionally exploiting Yuga’s goodwill. Instead, Yuga has sued only Mr. Ripps and Mr. Cahen for their successful protest and criticism of Yuga’s systematic use of racist and neo-Nazi messages and imagery.”

Ripps said in an interview that the suit was an attempt to make his critiques of BAYC seem insignificant.

“YugaLabs conveniently wants people to believe this is ‘a Ryder Ripps issue’—but the nearly boundless issues people have with YugaLabs are shared by thousands,” Ripps said. “We will not be silent.”