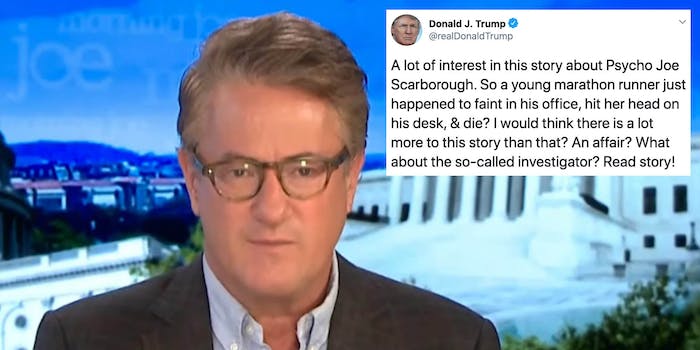 The president has repeatedly suggested the MSNBC host murdered an intern.

Referring to the journalist as “Psycho Joe Scarborough,” Trump alluded in a tweet on Sunday that the host, a former Republican representative in Florida, may have been involved in the death of an intern in 2001.

“So a young marathon runner just happened to faint in his office, hit her head on his desk, & die?” Trump said. “I would think there is a lot more to this story than that? An affair? What about the so-called investigator?”

The 28-year-old woman, Lori Klausutis, died in Scarborough’s district office due to an undiagnosed heart condition. The death was ruled at the time as an accident by the medical examiner.

Trump referenced an article on the subject from the True Pundit, a site that regularly posts debunked and false stories.

The unfounded tweet led to pushback online and even prompted Rep. Adam Kinzinger (R-Ill.) to call on the president to stop promoting the conspiracy.

Sunday’s tweet was far from the first time the president gave fuel to the conspiracy theory.

Just one day prior, the president referenced an obscure right-wing website that also reported on the story.

“A blow to her head? Body found under his desk? Left Congress suddenly? Big topic of discussion in Florida… and, he’s a Nut Job (with bad ratings),” Trump said. “Keep digging, use forensic geniuses!”

The president also commented on the intern’s death earlier this month while calling for Scarborough to be investigated.

“When will they open a Cold Case on the Psycho Joe Scarborough matter in Florida. Did he get away with murder? Some people think so,” Trump said. “Why did he leave Congress so quietly and quickly? Isn’t it obvious? What’s happening now? A total nut job!”

Another tweet from earlier in May likewise saw the president reference the conspiracy theory.

“‘Concast’ should open up a long overdue Florida Cold Case against Psycho Joe Scarborough,” Trump tweeted. “I know him and Crazy Mika well, used them beautifully in the last Election, dumped them nicely, and will state on the record that he is ‘nuts.’ Besides, bad ratings!”

Although Scarborough has not responded to Trump’s latest remarks, the journalist shot back at the president’s earlier tweets during a segment on his show in early May.

“You, once again, drag a family through this and make them relive it again, just like Seth Rich’s parents. As if losing a loved one the first time isn’t enough,” Scarborough said. “But this weekend, my God, you were supposed to have a working weekend. You got it wrong again.”