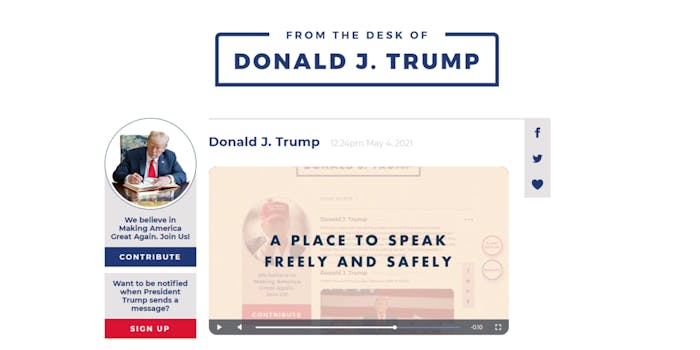 It's basically a blog.

Former President Donald Trump must really miss the megaphone he lost when he was banned from Twitter and Facebook following the Capitol riot.

Because on Tuesday, he launched a website. Where only he can write posts.

Trump’s new sounding board is “From The Desk Of Donald J. Trump,” a section of his website where—as of now—it’s just a long string of thoughts and posts from the former president.

On Tuesday, the site led with a video introducing the website, promising that it would be “a beacon of freedom” and a “place to speak freely and safely.” It has been backfilled with older posts of his as well.

While it promises a “place to speak freely and safely,” the site only has options for visitors to share the posts on Twitter and Facebook. It also has a heart icon, but it is unclear what exactly it does.

There are currently no options for users to interact with Trump’s posts.

The website was first reported on by Fox News. A source told the news outlet that it was just for “one-way communication” and just for “Trump to communicate with his followers.”

Trump has reportedly been mulling creating his own social media platform after being banned from others after the Capitol riot. It’s unclear whether Trump’s new website is that, or just a way for all of his statements to end up in one place.

The timing of Trump’s website launch also comes just one day before Facebook’s Oversight Board will announce whether the social media giant’s decision to ban the former president indefinitely will stand.