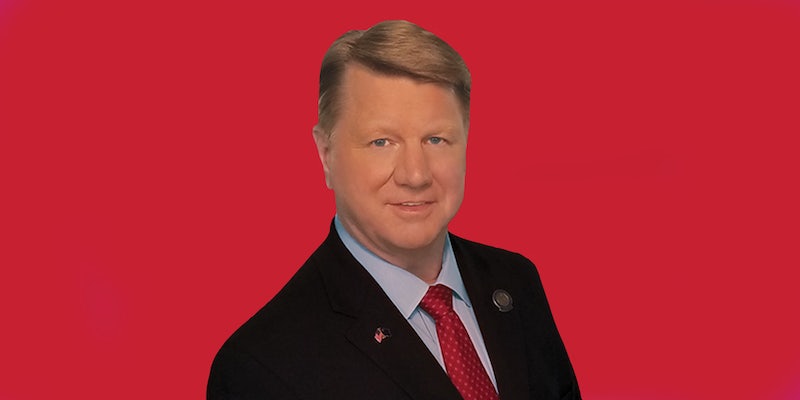 Jim Marchant, the Republican nominee for secretary of state in Nevada, has a conspiratorial online presence, as evidenced by the groups and people he follows from accounts on Gab and Telegram, which the Daily Dot has unearthed.

Marchant is a member of the far-right of the Republican party, who has stated that had he been Nevada’s secretary of state in 2020, he would not have certified the election for President Joe Biden.

A number of far-right Republicans have been running for office in states that swung the 2020 election, with the unspoken goal of keeping their states from sending Democratic electors to Congress in the event of another close presidential contest in 2024. Marchant is a key part of that effort; he co-founded the America First Secretaries of State Coalition (the other co-founder is a QAnon influencer named Wayne Willott and known as Juan O Savin). Five of the coalition’s candidates, including Marchant himself, have won their state’s Republican primaries.

Marchant’s personal Telegram account, and a Gab account that matches Marchant’s online identity, show just what voices are being listened to by someone who could hold sway in Nevada in 2024.

On Gab, a far-right haven for antisemitism, the account for Marchant follows 12 accounts.

What appears to be Marchant’s Gab account, @jcm9079, is under a username he has had across various forums and services since the mid-2000s.

In a statement to the Daily Dot, Marchant denied the accounts were his.

“We are not sure how these accounts were set up,” a spokesperson for Marchant said. “The Marchant campaign actively uses Facebook, Twitter, Instagram, and Truth Social.”

The account follows only 12 other users. Among them is a pro-Nazi QAnon influencer called IPOT1776. QAnon is the conspiracy theory that claims former President Donald Trump will soon arrest, imprison, try, and execute all of his most prominent opponents on charges of being Satan-worshipping pedophiles.

IPOT1776’s pinned post on Gab is a link to his latest video, a two-hour screed arguing that the Nazis were right about Jews. The video makes use of Nazi propaganda posters and antisemitic art, and borrows long stretches of material from at least one other neo-Nazi “documentary.”

The video’s central claim is that the Jews were spreading Communism and “degeneracy” and had to be stopped. The video portrays the Nazis as a natural and defensive reaction to the Judeo-Bolshevik menace—a sentiment that IPOT1776 has also recently expressed on Truth Social.

IPOT believes this Jewish menace is still a threat today.

It is important to note that it’s impossible to know when the account followed IPOT1776. The earliest possible date would be in January 2021, when this account was created. That was a few months before IPOT started posting overtly antisemitic content.

It’s possible @jcm9079 followed IPOT before it was openly pro-Nazi. However, in January 2021 IPOT was still an extremist—he had called for hangings and “citizen’s arrests” of people who had stolen the election from Trump.

IPOT’s posts also often make references to Q, and many of his videos use Q’s writings as a framework to interpret current events.

At a minimum, the account follows someone who openly fantasized about violent revenge against his political enemies, a jarring influence on the timeline of someone who could control the fate of Nevada’s six electoral votes.

Marchant said in a statement he does not know Watkins or IPOT.

Along with the QAnon promoters, @jcm9079 follows other fringe figures on Gab—most notably Paul Joseph Watson, a conspiratorial influencer whose popularity exploded on the coattails of Alex Jones.

The Gab account is under the username @jcm9079, which has been Marchant’s online alias of choice for decades. Marchant has clearly used it on various sites since long before he became a public figure.

For instance, starting in 2009 he used an account labeled jcm9079 to write fiery political commentary on the conservative site Redstate. One of his articles mentions that he met Newt Gingrich in Las Vegas. A Disqus account under jcm9079 also shows this user saying that he met Gingrich at an appearance in Las Vegas.

Marchant brought his politics into a forum for pickup truck owners. In a 2009 thread on a site called “The Diesel Stop,” user jcm9079 wrote: “They have not taken any Obama money and have so far avoided being taken over by our Marxist Government. Kudos to Ford!” The user signed the post “Jim,” and later in the thread revealed that he lived in Las Vegas.

That makes three separate instances of Marchant using the name “jcm9079” before he became a politician. Marchant was elected to the Nevada state legislature in 2016, serving a two-year term.

Marchant continued to use jcm9079 after he began his political career as well. A document available on the Nevada state legislature’s website shows him using jcm9079 as a personal email address in 2017.

Marchant has also used it as a handle in at least two other places: his Instagram and Rumble accounts are both under jcm9079.

Additionally, Marchant is a member of at least two QAnon-affiliated Telegram groups, and uses the app daily.

Telegram is a social media app that became the de facto hub of the QAnon movement after Q influencers and followers were banned from Twitter in the wake of the Jan. 6 Capitol riot.

One of the QAnon groups Marchant follows is run by a man known as “QAnon John.” The other is a chat for followers of Ron Watkins, who Marchant also follows on Gab.

QAnon John has organized several conferences for QAnon followers—including an October 2021 convention in Las Vegas, which Marchant attended and spoke at.

Marchant’s Telegram account is registered under his real name and with his personal cell phone number, which is publicly available in a document published by the Nevada state legislature.

Telegram’s desktop app will show the hour and minute a user last logged off, provided that it was recent enough. Over approximately two weeks of observation, it appears Marchant was a daily user of the app, frequently logging on in the late night and early morning.

Marchant’s association with QAnon promoters is hardly a secret and his denial of the 2020 election is openly known. But seeing the accounts he chooses to follow on far-right networks reveal just how deep those beliefs might go.

Al Jones is the pseudonymous founder of the Q Origins Project, which examines the roots, spread, and functions of QAnon culture past and present.