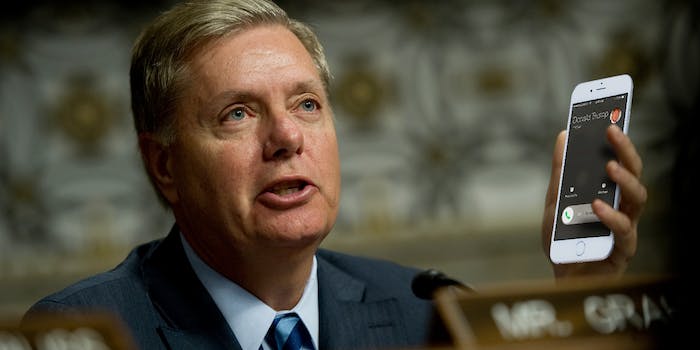 The race for the Republican presidential nomination is REALLY heating up.

During a campaign event in Bluffton, South Carolina, Trump, the blustering businessman who is leading in GOP primary polls, read out a number that begin with the D.C. area code 202 and said, “I don’t know—give it a shot.”

A reporter who tried the number said that it went straight to voicemail, but that it did feature a message saying the senator was not available.

.@CBSNews can confirm that the number Trump just read out on stage in South Carolina is Lindsey Graham's cell number.

McCain, who served in the Vietnam War, was shot down, captured, and tortured for years. He refused a special release deal offered by the North Vietnamese (his father was a senior military official at the time) out of respect for his fellow POWs. Trump, during a campaign event over the weekend, said that McCain was not a war hero.

“He’s a war hero because he was captured,” Trump said in describing how he thought people viewed McCain’s record. “I like people that weren’t captured.”

Responding to those remarks, Graham said Tuesday on CBS This Morning, “I don’t care if he drops out. Stay in the race—just stop being a jackass.”

In a statement, Graham’s campaign manager, Christian Ferry, said “Trump continues to show hourly that he is ill-prepared to be commander in chief.”

Update 2:09pm CT, July 21: Graham has responded on Twitter, although his response suggests that he does not realize he can keep his current phone and simply get a new number.

Probably getting a new phone. iPhone or Android?