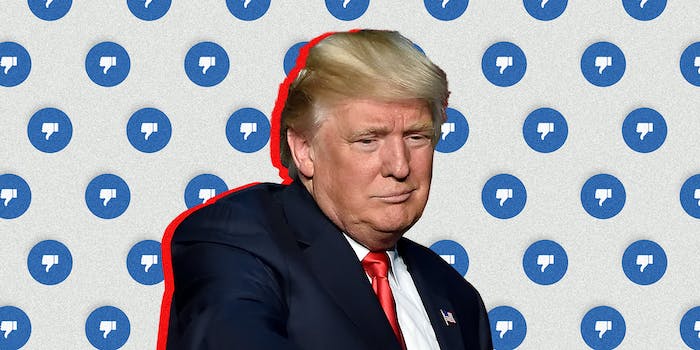 It said Trump's ban was 'justified,' but didn't agree with the indefinite ban.

Facebook’s Oversight Board announced on Wednesday that it was upholding the social media giant’s decision to ban former President Donald Trump. However, it also said it disagreed with the indefinite nature of the ban.

The much-anticipated decision from the Oversight Board, which is an independent group of hand-picked journalists, activists, and lawyers that was formed to look at content moderation decisions, came after Facebook referred its decision to ban Trump to them.

Facebook CEO Mark Zuckerberg announced that Trump would be banned from Facebook and Instagram indefinitely following his posts in the wake of the Capitol riot in January. Zuckerberg said at the time that he felt that “the risks of allowing the President to continue to use our service during this period are simply too great.”

On Wednesday, the Board said while it was upholding the decision to ban Trump, it disagreed with the “indeterminate and standardless penalty of indefinite suspension.”

“The Board also found Facebook violated its own rules by imposing a suspension that was ‘indefinite.’ This penalty is not described in Facebook’s content policies. It has no clear criteria and gives Facebook total discretion on when to impose or lift it,” the Board wrote in a tweet on Wednesday, adding: “Within 6 months of today, Facebook must review this matter and decide a new penalty that reflects its rules, the severity of the violation, and prospect of future harm. Facebook can either impose a time-limited suspension or account deletion.”

The Oversight Board said more than 9,000 people submitted comments to them regarding its Trump ban decision. The deluge in comments forced the Oversight Board to delay its decision, and earlier this week it signaled that it would be announced today.

In its findings, the Board said they found that Facebook was in bounds for saying that two of Trump’s posts following the Capitol riot violated its standards and was “justified” in suspending Trump’s accounts.

“‘Indefinite’ suspensions are not described in the company’s content policies. Facebook’s normal penalties include removing the violating content, imposing a time-bound period of suspension, or permanently disabling the page and account,” the Board wrote.

The Board said Facebook must “reexamine the arbitrary penalty it imposed” on Trump within the next six months and “decide the appropriate penalty.” Given that the Board asked Facebook to review the indefinite nature of the ban, it does open the possibility of Trump returning to the platform in the future.

Trump himself seemed to try and get ahead of the decision by launching a new website where, as of right now, only he can post. It’s essentially just a blog for his followers to read his thoughts that replaces the megaphone he previously had on Twitter and Facebook.