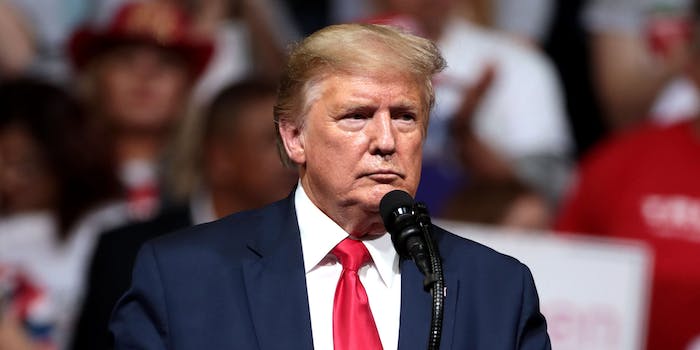 'My request is simple: please delete these tweets.'

Timothy Klausutis, the husband of Lori Klausutis—who died in 2001 while working as an aide for Joe Scarborough—has asked Twitter CEO Jack Dorsey to take down a series of tweets President Donald Trump wrote promoting a conspiracy that she was murdered by the now-MSNBC host.

The letter was published by the New York Times in an opinion piece on Tuesday.

Trump has tweeted about the death of Klausutis repeatedly over the last month (and earlier in his tenure as president), implying that there is a conspiracy surrounding her death.

Klausutis was 28 when she died in Scarborough’s district office in Florida after losing consciousness “because of an abnormal heart rhythm” while he was a congressman. Her death was ruled an accident.

That hasn’t stopped the president from amplifying a conspiracy about her being murdered—even drawing condemnation from a conservative media figure and a Republican lawmaker.

The president’s most recent tweets prompted Klausutis to write a letter to Dorsey.

“My request is simple: please delete these tweets,” Klausutis wrote in the letter, adding: “I’m asking you to intervene in this instance because the President of the United States has taken something that does not belong to him—the memory of my dead wife—and perverted it for perceived political gain.”

Klausutis argues that according to Twitter’s rules and terms of service, the tweets be removed.

“An ordinary user like me would be banished from the platform for such a tweet, but I am only asking that these tweets be removed,” Klausutis wrote last week.

Twitter has been criticized for its ability to combat misinformation on the platform—including coming from Trump himself.

Sources told the New York Times that Twitter was “trying to figure out what to do over the weekend” regarding the president’s tweets about Klausutis, but has “accelerated work on a more robust rubric around labeling and dealing with such falsehoods.”

Trump tweeted about Scarborough and Klausutis again this morning.