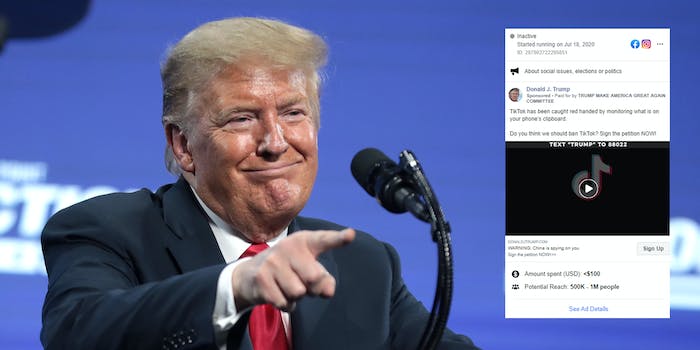 After getting trolled by teens, Trump ramps up war on TikTok

President Donald Trump ratcheted up his rhetoric against TikTok over the weekend, when his campaign ran several ads on Facebook claiming that the popular app was spying on users for China.

The ads all direct Facebook users to a survey asking whether TikTok should be banned in the country and a form to give personal information to the campaign.

“TikTok has been caught red handed by monitoring what is on your phone’s clipboard. Do you think we should ban TikTok? Sign the petition NOW!” the ads read.

The ad blitz from Trump comes amid the administration saying it was considering banning the app in the United States.

The president’s Facebook page pushed out numerous variations of similar ads over the weekend that were critical of TikTok, according to Facebook’s ad library. The ads were first spotted by New York Times reporter Taylor Lorenz.

The crux of Trump’s ad are reports that TikTok accessed the clipboard of users’ phones. Researchers showed that numerous other apps also do the same thing. Last month, TikTok said it would stop the practice.

While Trump is now campaigning on the issue, TikTok has been under fire from both sides of the aisle for months.

Members of Congress have called for a national security investigation into the app, and several elements of the government have banned people from having the app on government-issued phones.

Questions have been raised about data security on TikTok because it is owned by a China-based company. TikTok has defended itself against those concerns, saying U.S. user data is stored within the country.

Trump’s interest in pushing against the app also comes as its users have repeatedly made him a target for trolling.

Most notably, TikTok users and K-Pop fans flooded the Trump campaign’s sign-up sheet for his rally in Tulsa, Oklahoma, making it appear like there was much more interest in attending the event than there really was.

The attendance at the rally was much lower than the campaign had bragged about beforehand.

But there have been other instances of TikTokers messing with Trump.

In recent weeks, they have pushed the reviews for the official Trump 2020 app down on Apple’s App Store and Google’s Play Store, trolled the Trump campaign’s online store using a tactic called “shopping cart abandonment,” and review-bombed Trump-owned businesses on Yelp and Google.