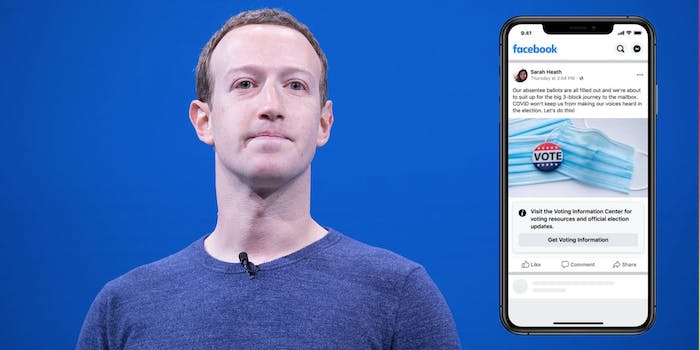 The company is following Twitter's lead after initially denouncing such policies.

Facebook CEO Mark Zuckerberg announced on Friday that “harmful” posts from public figures will soon include a warning label.

In a live stream addressing users, Zuckerberg said the new policy was aimed at addressing potential policy violations without having to remove posts deemed “newsworthy.”

“We’ll allow people to share this content to condemn it, just like we do with other problematic content, because this is an important part of how we discuss what’s acceptable in our society,” Zuckerberg said. “But we’ll add a prompt to tell people that the content they’re sharing may violate our policies.”

The move is a significant reversal for the tech giant, which initially criticized similar policies implemented by Twitter. Zuckerberg condemned Twitter’s actions, which saw fact-checking labels applied to several tweets from President Donald Trump, by arguing that social media platforms should not be “arbiters of truth.”

Twitter recently labeled a tweet from the president for violating its rules about “abusive behavior” after the president promised “serious force” for anyone who wanted to set up an “autonomous zone” in Washington, D.C. like one set up in Seattle.

The decision comes amid a growing advertising boycott against Facebook by numerous companies. Facebook employees even held a virtual walkout earlier this month in protest of the platform’s inaction regarding Trump’s posts.

Aside from labeling, Zuckerberg also announced new policies for content related to voting. Specifically, any post that mentions voting will now include a link to Facebook’s Voting Information Center in an effort to crack down on misinformation.

The tech CEO went on to add that the site would also begin disallowing hateful content in advertisements.

“We’re expanding our ads policy to prohibit claims that people from a specific race, ethnicity, national origin, religious affiliation, caste, sexual orientation, gender identity or immigration status are a threat to the physical safety, health or survival of others,” Zuckerberg said. “We’re also expanding our policies to better protect immigrants, migrants, refugees and asylum seekers from ads suggesting these groups are inferior or expressing contempt, dismissal or disgust directed at them.”