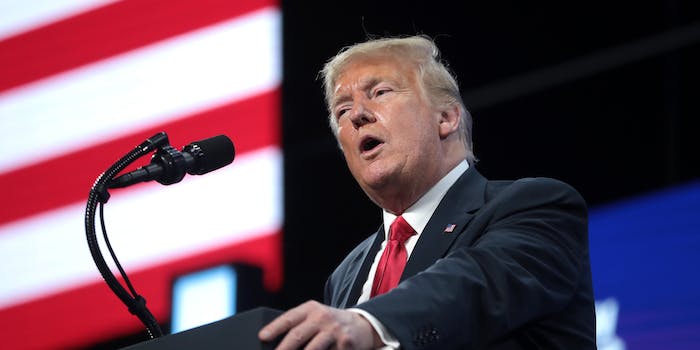 On the surface, experts say there isn't a violation, but the campaign could still have issues.

There could be a number of reasons for the dip in turnout, but at least part of the reason the campaign boasted about a potentially huge rally is because of a trolling campaign from the youths.

TikTok users and K-Pop fans filled out a sign-up form for Trump’s rally, with the goal of not coming at all. The push even got the attention of Rep. Alexandria Ocasio-Cortez (D-N.Y.) who said the campaign was “ROCKED by teens on TikTok” who “tricked” the campaign into thinking more people were interested in showing up at the event than there actually was.

In the wake of the low attendance and focus on the TikTok and K-Pop trick, some people online began speculating that the campaign may have violated a law surrounding the collection of information about children online.

That speculation was only fueled by Brad Parscale, Trump’s 2020 campaign director, who tweeted ahead of the rally that the sign-ups had surpassed 800,000 people and that it was the “biggest data haul and rally signup of all time.”

The Children’s Online Privacy Protection Act (COPPA) was passed in 1998 and puts strict parameters around how data and information can be collected on children. For websites that cater to children, parental consent is required for any child under the age of 13 to have data collected. Several companies have allegedly ran afoul of the law, including TikTok.

Technically, TikTok has said it would remove any videos made by users under the age of 13 to comply with COPPA as part of a settlement with the Federal Trade Commission (FTC). However, last month consumer groups wrote to the FTC, asserting that the popular app was not adhering to those promises, adding that there were “many regular account holders” under the age of 13.

But is the Trump campaign possibly in violation of COPPA because of the amounts of TikTok users and K-Pop fans flooding the Tulsa rally’s sign-up form?

It doesn’t appear that way, experts say. But that doesn’t mean the campaign is completely out of the water.

Susan Hintze, a partner at Hintze Law PLLC, told the Daily Dot the law specifies the kind of sites it has jurisdiction over.

Specifically, COPPA targets websites that are for children under the age of 13. The law also requires that any website would need to have “actual knowledge” that it was collecting information on those children.

Those two requirements would not likely apply to Trump’s campaign sign-up, Hintze said.

“The bigger issue here is that this is a general audience site, they’re not specifically targeting little kids, and in order for COPPA to apply, you … have to be targeting kids specifically,” Hintze said. “The next question is do you have actual knowledge you have collected information from kids? So neither of those seem to apply here.”

However, Hintze did note that its possible individual cases of COPPA could apply to the situation—and it comes down to parental consent and the “actual knowledge” part of the law.

Hintze said she imagined a scenario where a 12-year-old told their parents about trolling the Trump campaign after seeing the push on TikTok and deciding to join in.

“As a parent you’re concerned that your child’s information is now given to the Trump campaign, you could write an email to the Trump campaign and say ‘My child is 12 years old and signed up for your site. I did not authorize this. You need to take that down,’” Hintze said. “In that case, they would now have actual knowledge that they have collected information from a child and would have to go hunt down that information and delete it. So that’s the scenario here that I could see where they could gain actual knowledge.”

The campaign would have to take action—delete the information—and if it didn’t, that would become a COPPA violation, Hintze said.

The FTC notes on its website that general audience websites with actual knowledge they are collecting or using information covered by COPPA would have to adhere to it.

Raeesabbas Mohamed, a partner at RW Warner PLC, agreed that “on its face” the Trump campaign did not seem to be in violation of COPPA with the intake sign-up form for the Tulsa rally.

However, Mohamed also added that a parent complaining to the Trump campaign about their child’s information being collected could cause a cascade of events.

“If a parent complained, or somebody complained, they would certainly have—at a minimum—a duty to investigate, and they would have to delete that information. If they did not, it would be a COPPA violation,” Mohamed said. “I think if one got it, and they have knowledge of one complaint, a reasonable and prudent campaigner would say ‘Hey guys we have a problem, we need to now scrub all of these’ or at least the ones that sound similarly [and] could have been registered on the same platform.”

While many of the RSVPs sent to the Trump campaign were fake—like one TikToker who signed up as “Hugh Jass“—one 19-year-old who signed up told the New York Times their friends used their real phone numbers. While a 19-year-old’s data wouldn’t apply to COPPA, if a child under 13 did, it could raise issues for the campaign.

The Trump campaign did not return a request for comment from the Daily Dot, including whether it had received any complaints from parents and if it would delete any information stemming from those complaints.

The Trump campaign website does note in its privacy policy that if they are informed that they collected information from a child under the age of 13 that they would “delete that information.”

Following the Tulsa rally Parscale said the campaign was able to “weed out bogus numbers,” adding that there were “tens of thousands” for the Tulsa rally.